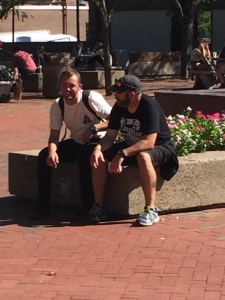 HUNTINGTON, WV – Our second day on the tour was probably the one with the most uncertainty.  A little more than a week before we arrived, Pelagian, hate preacher John McGlone and another were there on campus for a couple days.  The damage they did was undeniable.  Upon arriving at Marshall University, as we were setting up near the Memorial Fountain, Scott Smith politely offered a Gospel tract to a student passing by.  Her reply was, “No I don’t want it…I’m a Christian.” To which Scott replied, “Ma’am it’s a Gospel tract. If you don’t want it maybe you could give it to a friend.”  She immediately, though unprovoked, snapped back, “I’M NOT HATEFUL!”  We knew we had much work to do.

As the day went on, we took turns on the wall preaching the Good News of the Gospel.  Students would come by in small groups and a few pockets would form here and there as the day went out. Slowly, but surely, more and more students began to make their way around as the realization that we were not the hate preachers of before set in.

Part way into the afternoon a young lady named Heather introduced herself to me.  I had emailed her as she penned a piece about the hate preachers and gave her a heads-up that we would be there on our tour.  After taking in our preaching, she was glad we were there and even offered an invitation for AppalachiaCry to return working with a campus ministry.  (Not a typical thing you hear between campus ministries and open-air preachers.)

Pagans Loving Creation Rather Than The Creator

My first encounter began with a young lady who open admitted her bisexuality.  After conversing for a few minutes, she invited her friend that was passing by into the conversation.  She was overly excited that we were there to converse about the Gospel and not spew vile speech like the railers did before us.  A few more moments into the conversation and they both admitted to being pagans who worshipped by many of Aton Lavey’s teachings and creation itself.  I reasoned with them for almost 45 minutes before the young man had to leave and then another 45+ minutes with her after he left.

Our conversation continued and eventually led me to a point to press her on truth.  After another several minutes of conversation, taking the presuppositional approach, she was becoming frustrated as she realized her view was leading quickly to absurdity.  I continued to press on and she arrived at a point that she begrudgingly admitted that her position was falling apart.  I was able to share the Gospel a second time with her to reinforce the earlier part of the conversation.  She eventually had to leave but thanked me for the conversation and that we were not hateful.  Please pray for Zada and Nick.

Another conversation found me sharing a bench with a young man who was a Christian.  He was greatly encouraged by the preaching and again that we were not the same as the hate preachers that were previously there.  After discussing the importance of the Great Commission, we chatted for several minutes about the methodology behind Biblical, historical open-air preaching.  Like many truly born-again Christians, once you show examples from Scripture and how God used open-air preaching to advance the Gospel, though he said he couldn’t do it, in no way could someone condemn such a practice the way it was being presented before him.  He was very encouraged and said that our boldness was in turn stirring him up to be as bold with his fellow students for Christ.  Pray for Anthony that he would continue to labor in the Gospel with his fellow students. 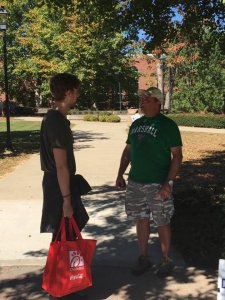 Throughout the day, our preaching was on a boundary about as wide as a razor’s edge.  Should our speech stumble, our flesh get the best of us with the occasional heckler, or we explain a truth in an ungentle way, it would place us in the ditch right next to the hate preachers.  As I watched the crowds when the brothers were preaching and even when I was preaching, I could see a look of anxiety on their faces.  It was as if they took in a deep breath and were ready to exhale in angry, shock, or sadness by what (they thought) was about to come out of our mouths.  They were just waiting for the hate speech to begin.

Many who we spoke to mentioned some of the hate speech that was spewed at them by the hate preachers.  Remarks like telling young ladies they deserved to be raped for dressing the way they did to racial slurs were the most common accusations by many.  Though I personally am not against signs, I put them all away before I began preaching.  I believe it was an unction of the Holy Spirit that I did that.  I sensed that though the signs were mostly Bible verses, just the appearance of them would stereotype us into the hate preachers camp before we even got started.  God was faithful as the crowd began to gather more and more as I continued to preach and while Andy Schmelzer continued afterwards.

The biggest exchange was when two young ladies stopped and questioned everything from the authenticity of the Bible to claiming Christianity was derived from other religions to flat out name calling as I apparently seemed to be a “jackass”.  Considering God once talked through an ass (Numbers 22:28), I was just encouraged more to continue to try and reason with them.  As they mocked God and began to walk off I called them to repentance, but they seemed to have even more hardened hearts.  Please pray for them.

After much damage control and clean-up, our preaching seemed to be well received overall.  Many students offered thanks to us that we were not like the hate preachers.  It was encouraging by day’s end considering what we walked into and what we were up against.  But is anything too difficult for the Lord (Jeremiah 32:27)?  Our next stop was the other question mark on the tour as Virginia Tech’s Police Department left me with uncertainty regarding our being on campus.  We would have to again trust in God’s sovereignty.