A lesson I was about to learn was that if we are just obedient to the command of the Great Commission, the Lord will put us in the right place at the right time before the right people.

ELKINS – Of all the open-air events that the Lord allows me to do, the Mountain State Forest Festival in Elkins is perhaps my favorite.  From the wonderful smells of food that fill the air to some of the most visually thrilling scenery anywhere in West Virginia, the backdrop for this “pulpit” is second to none in West Virginia.

This year was extra special.  By God’s grace and in answer to prayer, I have been blessed by crossing paths with another open-air evangelist, Andy Schmelzer.  Andy moved here from Oregon and lives in Southern WV.  This was the first opportunity we had to minister together.

We began our time at the Elkins City Park on Thursday (10/6).  The street corner at the entrance to Davis & Elkins College served as our pulpit.  We were able to herald the Gospel to hundreds if not over a thousand folks as the foot traffic was abundant as festival goers passed our spot from the parking lot to the park. 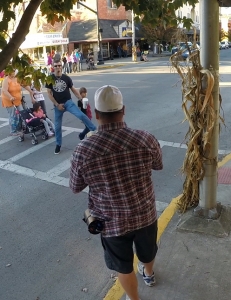 Andy being mocked by a blasphemer of the Gospel.

While Andy was preaching I met a young girl who was pregnant.  She seemed nervous and after talking for a few, she revealed that though she had two children, she had also miscarried two.  And naturally she was anxious about the current pregnancy.  But that wasn’t the most tragic part.  The most tragic part came to light as I was sharing Gospel truths with her.  She had come from a church teaching the prosperity gospel lie.  Like many others, when the reality of hard times in life rub up against “your best life now” theology and your only recourse is “name it and claim it”, one quickly sees the false gospel of prosperity for what it was.

The most tragic part came to light as I was sharing Gospel truths with her.  She had come from a church teaching the prosperity gospel lie.

All was not lost however.  After finishing explaining the Gospel and some truths about the Christian life and God, she seemed willing to be accepting of that truth and as if a weight had been lifted off her shoulders.   I prayed with her and gave her a Bible.

We finished up the night downtown on Davis Avenue as the rides and vendors opened for the first evening in the carnival area.  Andy and I took turns on the box and distributing Gospel tracts.  Andy was quickly greeted with a blasphemer and mocker of the Gospel as he grabbed his crotch.  Sadly he had his child with him setting a poor example.  Pray for him.

The next day, I flew solo.  Since the rides were open for the rest of the festival, I returned to Davis Avenue.  I was frustrated at first because the sweet spot we 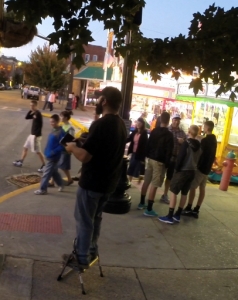 have at a 4-way intersection was not productive as there were some mini events slated before the big parade that evening.  I proceeded to setup down a side street very discouraged.  A lesson I was about to learn was that if we are just obedient to the command of the Great Commission, the Lord will put us in the right place at the right time before the right people.

As I somewhat begrudgingly setup on the side street, a crowd quickly gathered.  Before I knew it there was just under 20 folks (not counting those passing by) stopping to hear the Gospel. God is good!

Interestingly, a young, Middle-Eastern man came, sat down and began taking notes.  Afterwards, he approached me with many questions.  Kalid was searching and trying to reconcile the truths of the Bible and the Gospel with the Koran that he was raised with.  He wanted to reconcile them both to be believable in harmony. We talked for over an hour and he took a Bible and said he would return the next evening.

As I wrapped up the evening, a lady from one of the food concessions came at me in almost a sprint while I was preaching and proclaimed she was an atheist, tired of hearing the Gospel, and that I should move somewhere else. Pray for her hardened heart. 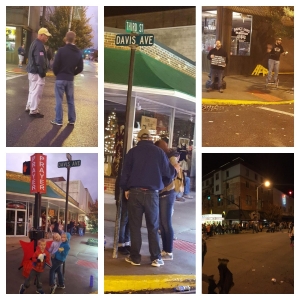 The last day was a lot thinner on the crowds due to weather.  Now understand that the mountain folk who attend this festival (close to 100K total) each year do no balk at a cold evening or snowflake.  However, cold rain does keep the most diligent festival attendee at bay. The evening cleared up but was cool, damp, and windy.  Nonetheless, I was joined by some of my brothers and sisters from my church.  This was the first time for many of them in an open-air environment.

One couple stood diagonally across the street handing out tracts and were quickly into a Gospel conversation.  Meanwhile we had coverage on another corner with another milling around the intersection of the streets handing out tracts and having conversations.  An elder at my church and dear brother setup our prayer stand and ministered from it across from me.  As I heralded the Gospel on the corner, another brother stood and held up signs that complemented the message I was preaching.  All and all it was a good evening.

Like the night before, though it was cold and we were tired, I preached one last open-air message.  Part way through the message I noticed two men standing in the middle of the street listening.  I discovered later on that they remember me from last year and stopped by again to listen.

Before my last sermon was done, I noticed a young girl sitting around the corner listening.  She came up to talk afterwards.  Her name was Michaela.  It turns out God had saved her and rescued her out of a lifestyle of homosexuality.  As I preached the Gospel, she said it encouraged her and brought her to tears as she was joyful for what the Lord had done.  Pray for her.

Our time at the Mountain State Forest Festival all in all was God-honoring and I believe left glorious marks of the Gospel on the town.  By God’s grace I look forward to returning next year.