INDIANAPOLIS, IN – This time last year, I found myself in Atlanta, GA for the SEC Championship game. Though it was nice and I definitely prefer the warmer temps, flying was not in the cards this year. So, I took brother Michael Coughlin of ThingsAbove.us up on his invitation to join his team. I was able to crash at his place Friday evening (about a 3 hour drive) and then only had a 2 hour and 45 min trip to Indy from there Saturday morning. By God’s grace we had a total of 14 saints there to share the Gospel with fans at Lucas Oil Stadium.

The fan fest that takes place during the day is a well-done event. There are plenty of law enforcement personnel and it is setup in a way that creates great foot traffic flowing in and out of the event area. Since we had such a large team, we were able to stage a team at both entrances of the fan festivities.

I led our team off preaching first. The early crowds were verbally dormant most of the afternoon. There was the occasional passerby who would shake their head, mumble something, or tell us we were “number one”. Most folks were receptive of the Gospel message, some even giving a thumbs up or walking over to verbally thank us for being there. 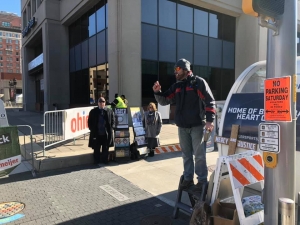 Loving my Jehovah Witness friends with the Gospel.

Probably the crowd most disturbed by our preaching was our neighbors, the Jehovah Witnesses. They were setup with their heretical literature just a few steps away from our corner. By God’s provision, they were exposed to the preaching for about 5 hours. A couple brothers went over to plead and try to reason with them, to no avail. As they always do, when they were pressed on some beliefs the whipped out the victim card. It usually goes something like this, “We understand that you’re a bit more zealous, and that’s fine. We simply choose to stand over here quietly. We don’t wish to argue or debate.”

I noticed that some folks standing around were seeing and hearing part of that dialogue. Rather than allow them to play the victim card, I suddently felt a provocation (Acts 17:16) knowing the damnable lies they were peddling while I was preparing to take my next turn on the box. As I preached the Gospel, I continued to circle around back and forth and address their theology (Jude 1:3) with Gospel truths. By God’s grace, the Spirit tempered my flesh as it wanted to rise knowing such damnable lies were being declared as truth. All the while I referred to them as “my Jehovah Witness friends over there”, although I’m not sure they felt the same about me. 😉

As the day went on, the ambient noise continued to rise. Despite our wonderful location, we were in the audio crossfire of the fan fest stage and a street performer across the street. Though the Aker was adequate most of the day, if I return next year, I’ll definitely take the trusty ‘ol hailer and adjust as the day goes. Thankfully salvation of the lost rests on God’s sovereignty (Jonah 2:9), the Author and Finisher of our faith (Hebrews 12:2), and not our volume.

All in all, we preached and handed out tracts for about 5 hours. Afterwards, we enjoyed some wonderful fellowship with one another at a fantastic Mexican restaurant called Paco’s Taqueria (if you are ever in the Indianapolis area, it’s definitely worth a stop) and brother Michael Coughlin even picked up the tab for dinner! How great is that?!!