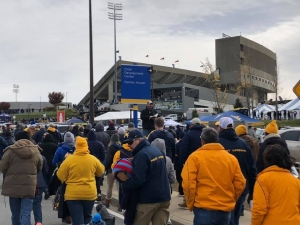 Eric preaches to the growing crowds.

MORGANTOWN, WV – With a chill in the air, Eric and I setup shop just a couple hours before kickoff. Due to the chill in the air and the morbid season, it was no surprise that the crowds were “late”. Though the tailgates were full of the usual music and revelry, the crowds were in no hurry to leave the comfort of portable heaters and take on the cold breeze and frigid bleachers.

As kickoff grew closer, the crowds began to move. The biggest swells of fans were within 45 minutes of kickoffs. Nothing out of the ordinary was to be found. There were the usual suspects. The drive-by heckler and (surprisingly) professing believers passing by with a fist bump were in great supply. We preached until shortly after kickoff, then called it a day by stopping off at a Middle-Eastern supermarket for some baklava to eat on the way home.