Adam building relationships by helping out with little things.

CLARKSBURG – As the weather continues to improve, seemingly so does the crowds in Glen Elk. Despite the heat, several folks were hanging out around the Clarksburg Mission and adjacent street corner.  God continues to be faithful and our time continues to be fruitful.  As usual, Gospel proclamation leads to Gospel conversations.

There’s a First Time for Everything

This night was special as it was the first time Adam open-air preached.  Though he’s a seasoned preacher from his time as an elder at his previous church, this was the first time on the street.  Street preaching is a very flesh-killing endeavor as the herald cannot hide behind a pulpit or typical “Christianese” phrases.  On the streets, it’s raw, unpredictable, and God’s man must be able to not only boldly declare the truth in love (Eph. 4:15), but do so in a manner that is understandable. I like to say, “Keep it on the bottom shelf.”

The joy of seeing Adam begin his street preaching was two-fold. First, it’s a joy to see another brother grow and step out in faith to herald the only true message that can save.  Second, it offers listeners another style, presentation, and attitude through which to hear the Gospel. This was proven yet again as after both of us preached, a lady came over to talk and, though Adam went first and almost an hour and 1/2 had elapsed, it was his message about broken cisterns that she remembered – not my message I had just finished 10 minutes prior to her walking over.  Pray for Erin.

Damian Hears the Law and Grace

After I had finished preaching, a young man was passing by with a stereo.  We asked how he was doing and he said, “OK… You know… just passing from point A to point B…” In an effort to stir up a conversation, I asked where he would be when he got to “point Z”.  The conversation went on, and though like many he confirmed basic tenants of the Christian faith, we sensed something was a bit off.

After a few minutes, it was obvious he was trusting in his works for his eternity.  We transitioned the conversation over to the “Good Person Test” and using law and grace brought him to the foot of the cross.  He left admitting he needed to change his ways (a stark difference than what he originally told us when we first started talking).  He took a Bible and tract. Pray for Damian.

Harry, Charlie, and the Evangecube 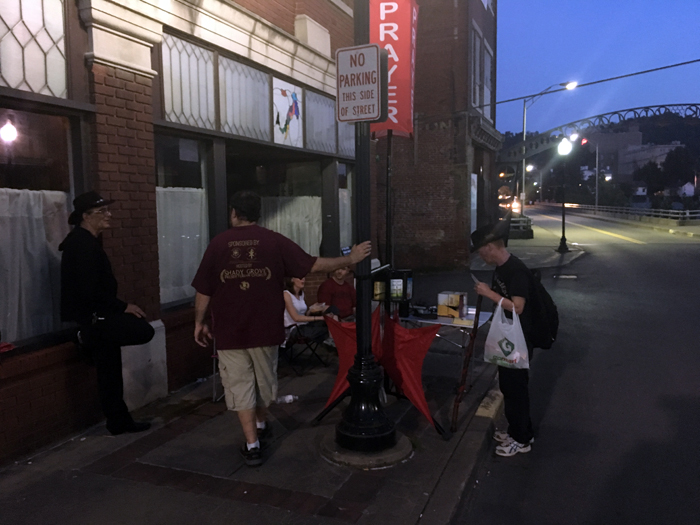 One of our favorite tools is the Evangecube. It provides a visual accompaniment to the Gospel presentation.  The great thing is that it goes as deep as you want to depending on your audience.  It can be presented simple for children or with more detail for adults.  They are priced pretty reasonable.

Our friend Harry (you may remember him from a couple weeks ago) and Charlie stopped by to chat.  They were looking at the evangecube so I decided to engage them with the Gospel story again.  Please pray for Harry and Charlie.

Please continue to keep us in prayer as we press on with the Gospel in the Clarksburg neighborhood of Glen Elk.  We have some ideas to take this to the next level, but need prayers, discernment, and funding.