CLARKSBURG – Ask anyone who has spent a significant amount of time in street ministry and you will learn to be sure of one thing.  Unlike a controlled atmosphere in a casual church setting, you never know what to expect.  You learn to expect the unexpected.  This night in Glen Elk was that kind of night and the most eventful one so far.

Adam showed up with a couple dozen donuts for our table and some water.  This made for a more inviting setup and worked well.  Folks made their way over cautiously at first, but when they learned we didn’t want their money, let their guard down and engaged in conversations.  In fact, one young lady even pointed out that she “hates churches because every time I’ve went, all they talk about is money…”  Despite her feeding the majority of her donut to the pigeons as she walked back across the street, it was just beginning to get interesting.

A Freight Train to Hell

Our first major conversation began with a young lady, Desiree.  She had another regular at the Clarksburg Mission trying to de-tangle her hair in what resembled a rat’s nest she said was a result of an altercation earlier.  We offered her a more comfortable chair at our setup and she accepted and brought her makeshift hair stylist with her.

Adam began the conversation taking inventory to see where she was spiritually.  Without pause, she admitted to her condition of addiction and anger problems and acknowledgement that she was going to hell (by her own admission).  We pleaded with her as that would not be a good thing and Adam led the conversation pressing further and further into the Gospel, not without many interruptions.  Sometimes the most difficult part of sharing the Gospel is avoiding side tracks and keep the conversation moving forward.

As we continued to talk with her, her boyfriend, named Michael, passed by making several verbal remarks against our presence.  At one point he semi-whispered in her ear, “…don’t you bring any of that religion stuff back to me, you know I don’t believe in that [explicative]” as he took a cigarette and headed up the street.  Despite Michael’s distractions, Adam and Waylon continued to press on.

While they continued to minister to Desiree, I was able to share the Gospel with another guy named James.  He seemed very kind.  He agreed with the Gospel message but was struggling with justice as he did not feel his jail sentence he received from killing a passenger in a car accident should have been worse than another horrific crime that happened with a lesser sentence.  This rolled out the welcome mat for me to talk about God’s perfect justice. All the while, the conversation with James bled over into Adam’s conversation with Desiree into one big conversation about the Gospel.

Winning Over a Universalist

Howie the Universalist “clergyman” returned (read about previous encounters here and here).  He is slowly coming around and fostering and odd relationship with us.  Each time, we try to press him more and more.  Pray for Howie.

While Adam and Waylon continued with Desiree and James, two other men happened by named Eric and Thomas.  They were in good spirits, especially with a free donut, and just smiled as we began to talk about Christ and His Gospel.  This was a fresh encounter compared to many I have with professing Christians who discount and sometimes downright hate open-air preaching.  A true believer will never tire of hearing the Gospel message!

I went through the Gospel message using the Evangecube.  What a sweet spirit they had about them smiling and nodding as we went through the Good News! The only concern Eric had was how to believe that God really could forgive him.  Eric struggled with assurance though from the short time we had talked he appeared to be a believer.  Both took  a J.C. Ryle tract “Are You Born Again?” and Eric also took a Bible.  Pray for Thomas and Eric.

An Assault by Bodily Fluid and an Unlikely Defender 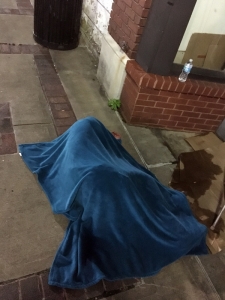 Earlier in the evening a regular there was found to be drunk again on the next corner down.  Strangely, Michael had a soft spot for the drunkard and carried him down the street next to us  and put him on a chair in the doorway of the abandoned building we were in front of.  Before long he was passed out to the point of falling over on the sidewalk where he remained even after we left.  Shortly thereafter, we noticed a stream of urine heading towards our chairs that eventually made its way to the street before it got to us.

Meanwhile, Desiree was still getting her hair untangled (with some help of Friz-Eez Adam graciously ran to the store and bought).  As we continued to talk, a lady rounded the corner and stopped unsure why there was such a large crowd there.  Adam replied we were just giving away free donuts and water.  She made a beeline out and away from our stand only to shout across the street to another “Don’t eat those donuts! They’re poisoned and they’re trying to trick you with that religion (blah blah)…”  Before we knew it, Desiree leaped from her seat and hurled a tapestry of profanities towards the lady threatening her bodily harm for her coming against “…these nice guys who are just talking to us about Jesus…”  Adam quickly assured her that God is our Defender.  This was only temporary as she eventually took off around the next corner after the lady.  She eventually returned to her stylist to continue working on her hair and conversation with us.

I mentioned to him that there was nothing in his past that Christ could not forgive, and his face was that of a convicted killer who just had his sentence of execution cancelled.  It was as if the offer of salvation thrusted the full weight of condemnation off his shoulders.

Adam and Waylon were privy to a phone conversation (from our “defender” talking to her sister about her child who she can’t see right now, while on Adam’s phone) with so many tears and F-bombs, they lost count. Adam and Waylon prayed with her afterwards as she was so upset she wanted to either “kill herself” or “just get high”.  Pray for Desiree.

Melting the Heart of Stone

Before our “defender” went on her quest, earlier in the conversation, Michael had returned and was sitting next to us on the corner overhearing all the Gospel conversations taking place.  I asked what he thought about the message, but he blatantly ignored me.  When he looked over and made eye contact, I asked him again.  He replied, “Listen man I don’t believe in this whole God thing — I mean, I’m not an atheist, but…”  So I gave him some scenarios and exposed that there has to be an objective standard of good and bad, otherwise it doesn’t work.  As we continued and pressed on, I was not prepared for what he did next.

While in mid-sentence he stood up from the chair, pointed at me, looked me straight in the eyes and said, “Look, if you want to walk up the street I’ll talk to you, but I ain’t talking in front of all them…”  So I obliged and up to the next corner we went.

He said, “You know, if there is this God for real, then He’s going to send me straight to hell for everything I’ve done, even the stuff I’ve thought…”  This is a moment every Christian should wish for.  A moment when the unbelieving God-hater (Romans 1:30) comes to a realization that he has no hope and is out of options.  He continued, “And I’m… I’m… I’m afraid to die…” as his eyes began to fill with tears.

I believe that from the law and grace he had heard over the previous hour had wore down his stony heart.  After continuing explaining what Christ did on the cross, how God’s wrath that he deserves was satisfied, and that God wants a relationship with him and wants to save him, he was all but too eager to hear more.  I mentioned to him that there was nothing in his past that Christ could not forgive, and his face was that of a convicted killer who just had his sentence of execution cancelled.  It was as if the offer of salvation thrusted the full weight of condemnation off his shoulders.

When we finished we slowly walked back down to our group (to give him time to compose himself).  We gave him a Bible, tracts, and our contact information.  I then asked before he left if he would consider surrendering and receiving Christ.  He anxiously agreed and we walked back up to the 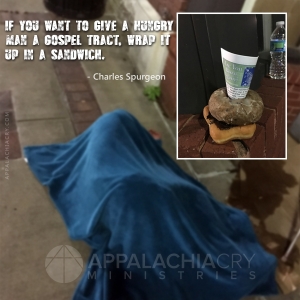 corner.  I gave him a framework of how to pray (a confession of sin, a pleading to God for the gift of repentance, and to trust in

Christ) and stood silently and prayed while he prayed silently.  With tears filling his eyes again, he hugged me for probably the 4th time and thanked me.  As faithful ministers of the Gospel we trust his salvation to the Lord (Jonah 2:9) and not some man-made prayer to be repeated.  Pray for Michael.

All in all, it was a good night perhaps seeing regeneration take place before our eyes.  We finished up by taking the great Charles Spurgeon’s words to heart and