CLARKSBURG – God blessed our time in Glen Elk again this past Monday.  We had the opportunity to meet a family member of one of the regulars and saw, what appeared to be, another person broken by the call to repentance and faith, surrendering their life to Christ by the end of the evening.

A smaller group than normal met around 6:15.  Jeff Price was able to join us – it was good to have him as he’s a dear friend and man of God.  The night of ministry had a slow start.  I was running behind due to unforeseen traffic delays so Adam, Waylon, and Jeff set up the prayer stand and set out a few boxes of cookies and some water bottles (which went fast as it was a hot evening) along with the Evangecube, Bibles and other literature.  Quite a few folks were milling around early on, but nobody made their way over to the group.

An inebriated man came through very upset at the ministry across the street as, in his words, they refused him food.  While it was clear why he was not permitted in the building, the team tried, nonetheless, to engage him.  Attempts to empathize and entreat the man to talk or at least take some food and water was met with nothing but rejection and discontent with anything related to God.  He found his way up the street, lay down on the sidewalk, and tried to sleep it off.  He made his way back down in time, but his spirit was still obstinate.  How serious is the reality of sin and bondage in Glen Elk?… Honestly, how is it EVERYWHERE… its only in places like Glen Elk that its put on display and made all the more obvious.

As the evening progressed a wonder crept up in Adam’s mind… “Could this be the week where we make ourselves available but are not given the blessing of a Gospel conversation?”  Soon after these thoughts began to creep up, a resident we met last week, Justin, stood up across the street and Adam called over to him, asking if he wanted a cookie to satisfy a sweet tooth.  He gladly accepted and began to come over.  Behind him another voice was heard: “You had me at chocolate chip!”  That voice was from Amy, the young lady who was selflessly working to detangle Desiree’s hair the previous week (read that story here).  Amy made her way over, got a cookie, and seemed to want to hang around.  She was offered a chair and was eager to take it.

And so began a 2 hour Gospel conversation between Adam, Jeff, and Amy.  Amy has been around church and was convinced she was ok.  She had an understanding of God, of Jesus, of sin, of what Christ did on the cross.  She had all the facts and “believed” the Gospel story was true.  How many others are in that same place?  A knowledge of and firm belief in and affirmation of the gospel story… yet, no salvation.  Like so many, belief without repentance (which is really, no belief at all).  After taking Amy to 2 Corinthians 7:10-11 to discuss what “God’s grief that produces repentance leading to salvation without regret” looks like, it still seemed like there was a block in Amy’s heart and mind (they had not been changed… repentance is a change of heart and mind about oneself, about Jesus, and about sin… all of which will lead to a change in behavior downstream).  The topic of the ultimate purpose of life (Why was Amy created?) led to an affirmation that God created her for His glory and did so by making her in His image with unique skills and abilities.  When asked what she thought those might be she referred to her strong will to press through… a “stick-to-it-iveness” that’s she’s always had.  The conversation then turned to her kids and her determination to get them back in the future (current in adoptive care).  Slowly but, by God’s grace, surely, Amy began to see her need for true repentance.  She began to see her need to hate the sin in her life to desire to be free of it’s bondage.  With tears beginning to form, Adam asked her what she thought she should do and how should she respond to God’s offer of salvation through repentance and faith.  Amy’s response was to [paraphrase] “get her life right and stop making excuses… to buckle down”.  This was the turning point of the conversation as Adam said in response: “In love and respect… I have to disagree with you Amy.  What Amy needs to do is surrender.  To admit she can’t fix herself, she can’t save herself, and to cry out to the Lord for mercy to save her.”  The same God-given strength of her will was working against her – she needed to give up and give in to the Lord, resting on the finished work of Christ on the cross instead of her own strength and determination. 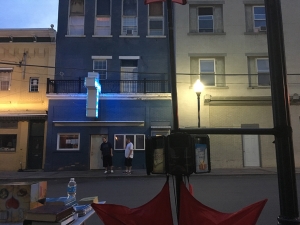 There is something incredible about the truth of surrender.  We have seen entire countenances change when the topic of surrender/submit surfaces.  Belief is welcome and celebrated.  Repentance (albeit likely improperly understood by most) is even tolerated.  Surrender –  submit to the Lordship of Jesus, that’s where the rubber truly meets the road.  For Amy, God was gracious and appeared to break her.  The glassy eyes filled and her head dropped.  More plowing took place for another 10-15 minutes further engaging her, drawing out what God was doing.  When asked if she wanted to surrender her life to the Lord, she responded by simply shaking her head yes.  Jeff and Adam then helped her understand that all she need do is cry out to the Lord to save her… cry out for mercy, admit her sinfulness and desire to repent.  Jeff and Adam then grouped around her as she prayed to herself.  Adam then prayed for her as did Jeff.

By way of follow-up, we gave Amy an ESV Bible (one a little easier to read and understand than the KJV that she already had).  We encouraged her to read through the book of Mark, and provided her with a short book we recently purchased called “What is a Christian” by Ryan McGraw.  We also provided a Bible study booklet designed by a few ACM members that she could do on her own down the road.  We encouraged her to attend church where other Christians, especially other women, could gather around her and love on her and help her grow.  Please pray that God would “make [Amy’s] calling and election sure” in the coming days/weeks and that what appeared a new life started right before our eyes, would truly be the case.

While the conversation with Amy was extensive and ended very well, another conversation took place between myself, Waylon, Sky (another regular visitor) and Sky’s mother, Kathy.  I led the charge in that discussion, getting right to the point with Kathy.  She listened and was complementary of my knowledge of the Scriptures and ability to explain the Bible well.  In response, I thanked her but, rightly, redirected the attention off himself to the Lord, entreating Sky’s mom regarding the brevity of life and her need for a savior.  Alas… her hard, laissez-faire heart just could not see the seriousness of her situation when she understood that death comes for us all.  She agreed to consider the conversation and all the truth that we shared with her.  She was even seen at the prayer stand afterwards picking through the available tracts, even taking at least one with her.  We’re so thankful that we serve a sovereign God. One who can plant truth in the hardest of soil, water it over time, haunting the unsaved with the Gospel, until days…weeks… or even years later… the seed planted (perhaps in Glen Elk Monday night) takes root, converts the sinner, and produces fruit.  ACM stands firm on the promise of Isaiah 55:11 – God’s word will not return empty but will accomplish that which God purposes.  Pray to that end for Sky’s mom, Kathy.

Please pray for the team.  Its been nearly two months of weekly ministry focused on Glen Elk.  It seems that every week there are temptations and various roadblocks that surface the most on Monday.  Often the team has arrived only to spend time confessing all nature of spiritual or relational failures during the day.  Pray for our families.  Pray for us as the spiritual leaders of those families.  Pray for the churches we attend.  But most of all, pray for the glory of God to be known and loved by the ACM team and those they minister to each week.