Charlottesville and the Tower in Siloam

CHARLOTTESVILLE VA – Less than a week after Heather Heyer was mowed down by a white supremacist during the riots in Charlottesville, I joined some brothers to lift the name of Christ by the preaching of the Gospel across from her makeshift memorial site (full story here).  Of the objections we heard, the most common one that the objector expressed with the most confidence was something like, “Would Jesus do this with all these people here mourning? Would He be telling them they need to repent?” 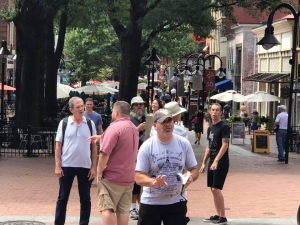 Lifting the name of Christ, heralding the Gospel in the darkness of Charlottesville.

At first, most Christians would even balk at this question as it appears to have merit.  Would Jesus really be calling people to repentance at a time like this? Would he really be telling them to repent of their sins as they mourned the loss of someone in their community? Surely a God of love would not do such a thing while people were hurting!

While on the surface those sound like great arguments with at least some weight, as with everything, it must be weighed against Scripture. And when we look into Scripture we find that those remarks do nothing more than pull at our heartstrings and drum up a misguided sentiment from a place within us that is “deceitful above all things, and desperately sick” (Jeremiah 17:9).  Those emotions are trumped by the truth of Scripture and the examples set forth by our Lord Christ Jesus.

The best answer we could give to the person objecting is found in Luke 13 (emphasis added).

Here we see Jesus addressing two similar incidents where a group of individuals were killed.  Many believed that such a sudden horrific death was tied to the deceased people’s sin, similar to what we find in John 9:2.  Make no mistake that there is a connection between catastrophe and human evil.  All of it stems from the curse of humanity’s fallenness (Genesis 3:17-19).

Christ spoke these words as a reminder that none of us are guaranteed time to prepare for death, that now is the time to repent and get right with God.

By His words here in Luke 13, we see Him challenging that mindset that some deserved a worse fate than others.  Rather than camp there, His point was that all of us are in danger of sudden death, whether it be catastrophe, premeditated, or accidental.  Christ spoke these words as a reminder that none of us are guaranteed time to prepare for death, that now is the time to repent and get right with God.

One of the towers of Siloam accidentally collapsed and killed 18 people. Just as Heather Heyer didn’t wake up the morning of August 12, 2017 and plan on being killed, neither did the 18 that were crushed in the tower at Siloam.  The point is that none of us know the time the Lord will call us from this earth.  Today is the day of salvation (2 Corinthians 6:2)! And unless people repent from their sin and put their faith and trust in Christ, they too will perish.

Being obedient to the examples of hard sayings that our Lord gave us will not go without hard work.  Sometimes that “hard” is emotional, sometimes it is physical.  Either way it’s not easy, but necessary.