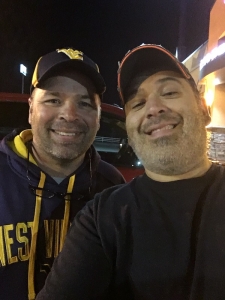 SUMMERSVILLE WV – One of the lesser-known festivals is the WV Potato Festival.  It is a wonderful place to open-air preach because most of the vendors are hemmed in around the Court House.  The main street in front of the Court House is only open to foot traffic.  As I arrived, brother Andy was already preaching the Gospel.  As soon as I turned the corner on to the main street from my parking spot, I could hear is voice reverberating through the town square.  The Gospel thundering down the streets in the setting of the cool, early Fall air really gets my blood going and heart racing.  The festival season in WV provides some of the best places to preach the Gospel.

A Future Hope in the Youth

Andy and I took turns preaching on the box.  There were a few men from his church in Summersville that joined us.  As Andy took his second turn on the box, he 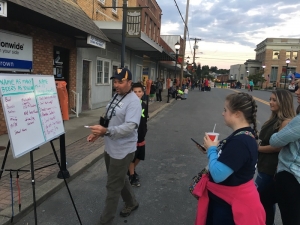 As one would figure, the list of beers was easily filled up with folks stopping by to gladly write the name of their alcoholic beverage of choice.  Yet none would even attempt to write in the 10 Commandments column.  Andy eventually admonished the crowd.  Not backing from his challenge, one by one, two by two, youth began to stop by and complete the list of the 10 Commandments. What joy it was to see this future generation step up and fill the void left by their adult predecessors who were either unknowing or ashamed.  Either way, what a testament that there is hope for the future with such informed and unashamed youth.

Lighting Up the Darkness

As our open-air time winded down, it was time for the Fireman’s Parade as the darkness began to creep in.  I headed back to my truck and returned with the Preach-O-matic.  I setup the black lights, opened the phosphate paints, and setup the outline while the parade passed by.  When the last firetruck roared by, I turned to find a crowd of curious bystanders. 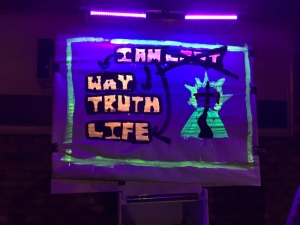 Sketch evangelism (Open Air Campaigners, USA is a great resource for training and supplies) can be a powerful tool to use in open-air evangelism. The painting seems to make the herald of the Gospel more approachable.  To take this to another level, rather than use boring lights with the regular paints, I have my rig setup with LED black lights that run off a small portable battery pack.  And to make the effect more pronounced, I use phosphate paints.  This provides a well-lit palette for the passerby to see.

I preached a simple message explaining how we get lost.  And in getting lost, 3 things we can lose are our way, truth, and eventually our life as we all will someday die.  This all creates a barrier between us and God.  I eventually make the barrier into a cross and explain how the only way to God, through the barrier, is through the cross of Christ.  And to wrap it up, I close with John 14:6 that reverses everything that hinders us – that Jesus is the Way, the Truth, and the Life.  This flips the script from the original starting point that we are lost.  The “lost” is nullified (crossed out) as we point to Christ solving this dilemma.  You can see a portion of my message in a clip that a passerby recorded here or down below.

All and all, we had a great day of evangelism.  The crowds seemed to be more thankful than in opposition.  The setup was fantastic as most of the folks were hemmed in to the area immediately around the Court House.  This also made it easy to get a nice volume as our voices resonated around the area with small Aker amps.  By the end of the night we were “Gospel tired” and that’s a good kind of tired to be.