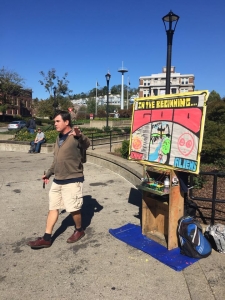 MORGANTOWN, WV – As we try to get back in a weekly routine at WVU, I met up with brothers Zane Dempsie of Open Air Campaigners and Pastor Matt Smart of New Hope Baptist Church.  These brothers bless me every time I get to minister with them.  They utilize an evangelism technique called “sketch evangelism”.  It is open-air preaching with a twist. Rather than simply standing on a corner heralding the Gospel as we typically do, this adds another dimension.  They use what we call a “Preach-o-Matic” that opens up into a mobile easel.  The technique still utilizes the proclamation of the Gospel, but compliments it with a visual image that is revealed as the message is told.

Natural curiosity draws a crowd as the outline and base image is created.  Once complete, there are usually a handful of bystanders waiting to satisfy their curiosity. At college campuses, atheism, objective morality, and absolute truth are triggers to getting conversations going.  By including such a visual, it allows the watcher to see the message come to life.

As the message went forward and at the completion, there were many students with questions and comments that we were able to have regarding the Gospel message.  Pastor Matt had a group awaiting him after he finished, brother Zane talked with a young man who was enamored with Pastor Matt’s message.

As I began to pack up, a young Muslim approached me to ask what was going on (a common question when folks see the painting).  I explained we were talking about the Gospel of Jesus Christ and asked if he knew who Christ was.  After he gave the standard, incorrect answer that every Muslim has, we walked off to the side together and talked for nearly 45 min.  Though he was set in his ways regarding his Muslim beliefs, he was kind enough to take a DVD with the Jesus story in Arabic and a couple Gospel resources I had.  Please pray for Mousa.

It was a busy and fruitful day as it usually is with these brothers.  They had never been to WVU before, so I was a delight that the day was busy and the students were engaged.  I hope to join them again at one of their regular open-air venues at colleges in PA.

For more information on Open Air Campaigners and how you can get started, visit: OACUSA.org.