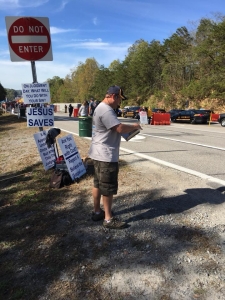 SUMMERSVILLE, WV – Thousands of people from West Virginia and all over the US come every year for “Bridge Day” at the New River Gorge Bridge. They come to watch as several thrill seekers hurl themselves from the side of the nation’s highest single arch bridge attached to nothing but a bungee cord. As thousands gather on the bridge, five soldiers of the Gospel – being led by the Spirit-gather at the entrance to the bridge. This position turned out to be the best possible scenario for these brothers and sisters to share the Gospel.

Brother Andy Schmelzer began the preaching of the Gospel at 10:00 AM. Every ten minutes a new bus load of people would be dropped off at the bridge…perfectly placed by the Lord to hear the Gospel message. As Andy delivered the massage his wife, Victoria, and other brothers in Christ handed out Gospel tracts. All told there were well over 1,000 tracts handed out! 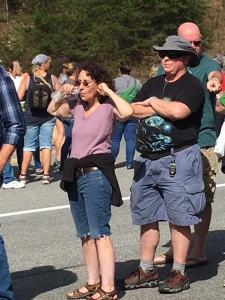 Next up to share the message of Truth was Brother Eric Madia. He began the message by playing “Nothing but the Blood” on the guitar. During the course of the day brother Eric and Brother Andy took turns bringing the Message of Christ. Amazingly two brothers in Christ (Brother Dale and Brother Randy) who had never preached before were led by the Spirit and each took turns sharing the Word. The highlight of the day came when every single person on the bridge flocked to the area God had chosen for His ministers to speak. The area where the preaching was taking place was providentially the bus stop for all the Bridge Day goers to leave! The last hour of preaching took place in front of over 1,000 souls. They were placed there by God to hear the Gospel message preached. The people had to wait on the shuttle buses to deliver them to their vehicles…and while they waited, they were treated to the Truth of the Gospel! Yes, the Spirit of God will lead us to the exactly the right place at exactly the right time…every time!