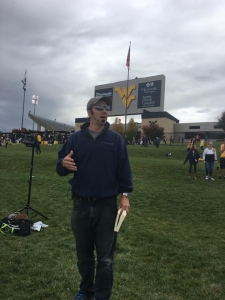 MORGANTOWN, WV – God was faithful yet again for our outreach efforts at WVU football games.  Though rain was forecasted earlier in the week, not a drop fell the entire time we were ministering.  We were operating on a skeleton crew, but the effort was worth it nonetheless.

For the majority of our time, it was just Adam and I.  We spend a few hours distributing Gospel tracts and some one-on-one conversations.  During one particular conversation, Adam had a good-sized group of young men that he engaged.  Though some of them peeled off, 3 of them stuck around for the entire Gospel conversation.  The conversation lasted for about a 1/2 hour and the ones who stuck around were engaged. 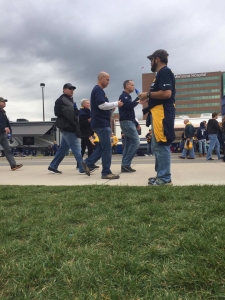 Soon thereafter, we were joined by brother Joseph Graves who we met on the Fall College Tour.  As Joseph and I continued to hand out tracts, Adam hopped up on the box and began preaching.  After about 15 minutes, the hecklers arrived and seemed non-stop from there on.  One man in particular using a “gotcha” posture, asked Adam about the other religions in the world, and what happens to all those people.  Adam replied several times, but the heckler wasn’t interested in sincere dialogue.

After Adam finished up, I began preaching with about the same results. Drive-by hecklers with one-liners that my 7 yr old could dispute with simple truths of the Scriptures.  I pressed on anyhow answering only a few of them.  I

Adam Felder sharing the Gospel with a group of fans.

finished up as the game began and the crowds disbursed into the stadium.

Our day was pretty much summed up by a photo Adam shot.  I was handing a tract to one man, while his friend was slugging down a beer.  The encouraging part of it (besides the fact one took a tract) was that most put them in their pockets.  This is a good thing because they’re likely to find when they sober up.  Please pray for those who heard the Gospel message and their salvation.