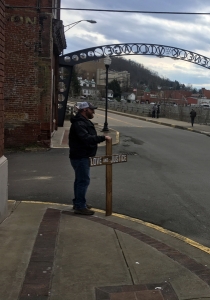 FAIRMONT/CLARKSBURG – We began a new journey for ACM at Fairmont State College.  Our initial plan was to share the Gospel on campus every Friday.  By regularly scheduling evangelism times, you can build relationships with those whom you are ministering to. Eric and I met up and drove to FSU.  The setup was very convenient as parking is ample and right near where we planned to minister at.  However, we would soon  learn why parking was so plentiful.

We setup the prayer stand and preach-o-matic.  As Eric assembled the prayer stand and arranged Bibles and tracts, I painted up a sketch in anticipation of the massive lunch crowds.  However, those crowds never showed.  Nonetheless, I began painting and speaking hoping to catch the ear of a passerby.  Soon, two students, Roman and Carlos, stopped by and I began to work through the sketch with them sharing the Gospel.  Carlos told Eric, “I’m on the fence with salvation.”  Please pray for them.

Eric spoke with a Danielle, a professor, who mentioned a prayer request.  One of her students (a sophomore) was diagnosed with Leukemia. Her name is Katie. Please pray for her.

After sharing the Gospel, I heard a familiar voice.  It was a young lady that I used to attend church with who is now a student there.  She explained what days were the busiest which was a huge help. It has been several years since I’ve been on FSU’s campus, so I was grateful for her explaining that lunches and such are served in a completely different place.  We will be moving our weekly date to Wednesdays and to the “new” student center.

Not to be discouraged, we saw that it was still early in the afternoon, so we’d drive back to Clarksburg and find somewhere downtown to preach, probably near a bus stop.

At one point while I was preaching, a lady walked over, sat down, and began taking notes! 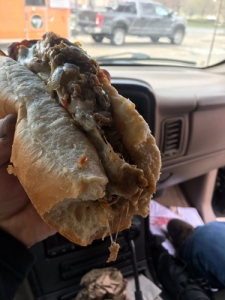 Preaching fuel to get recharged for the afternoon.

After not seeing many folks hanging out, we ended up in Glen Elk at our spot we preach at during the Spring/Summer months. While Eric was holding the cross, I began preaching to the folks milling around outside the Clarksburg Mission.  At one point while I was preaching, a lady walked over, sat down, and began taking notes! After I finished preaching, I handed Eric the Aker and headed across the street to talk to the listeners and offer tracts and Bibles.

It was very telling of the state of the church today as he described a local church in Clarksburg that not only did not preach the Gospel, but had many women who dressed immodestly.

The first person I encountered was R from out of town who was staying there.  His English was pretty broken, so we communicated through an app on his phone that translated between us.  But the interesting part of our conversation was seeing his aggravation for not being able to find a church that preaches the Gospel.  It was very telling of the state of the church today as he described a local church in Clarksburg that not only did not preach the Gospel, but had many women who dressed immodestly.  (I’ll spare you the vivid description.)

As our conversation ended, the lady who was taking notes was anxiously waiting to talk.  C is a recovering addict who has overdosed many times. Listening to her life of struggle was heartbreaking.  The most sobering memory was when she looked at me through tear-filled eyes and said, “I’m afraid to die…” And for good reason, she had no relationship with Christ by her own admission.  She then asked the question we want everyone to ask, “So how to do I get in on this? I mean how does this (salvation) all work?”

The most sobering memory was when she looked at me through tear-filled eyes and said, “I’m afraid to die…” And for good reason, she had no relationship with Christ by her own admission.

The rest of our conversation was me simply recapping the Gospel message I had just preached on the corner.  C understood the dangerous position she was in and that she needs to be saved.  I explained some things to pray and I prayed aloud for her while she prayed silently.  Please pray for C and her profession of faith. 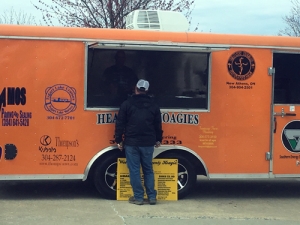 Eric begging the food truck for more food while I wait patiently to get going to our next preaching spot. 😛

Just as I went back across the street, brother Eric had finished up and we were approached by a young man who didn’t seem too happy with us.  W complained about the cross, our preaching, and the Gospel despite claiming to be a Christian.  He was quite the spirited fellow and at one point threatened us by shouting, “Do you really want to say that to someone who just did meth?”  He went on to pridefully beat his chest, his goodness, and claim his Christian faith.

At one point, I asked him what the Gospel was, but he could not give any answer whatsoever.  This is a common trend we see on the streets and (not surprisingly) the same church R was complaining about earlier.  However, the Holy Spirit continued to move and before we knew it, C had came back over across the street after hearing what we were being accused of and interrupted, “I want to thank you guys for coming out…” I then asked W if he heard that and pointed out the fallacy in his argument.  Then before W could get going again with his verbal tirade, one of his friends came over.  He asked his friend, “Yo man what do you think of what they’re doing here? Like with the cross and preaching out loud and stuff?…” His friend just came over to get a Bible and approvingly answered W.  As he walked off, W even took a Bible and thanked us for being there!

You never know what you’ll see on the streets, but God is always faithful.  Yet, you’ll never know or experience it from inside the 4 walls of the church.