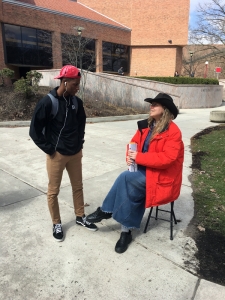 Jenifer Pepling sharing the Gospel with a student at IUP.

INDIANA, PA – One of the most enjoyable times of ministry is when you can labor with other brothers and sisters who are truly burdened for the lost.  The fellowship in the open-air evangelism community is second to none.  By God’s grace I was able to join some wonderful brothers and a sister at IUP for some campus evangelism.  I joined brothers Zane Dempsie and Pastor Ed Neimann of Open Air Campaigners (OACUSA.org), Pastor Matt Smart, and sister Jenifer Pepling of Christian College Network (ChangeYourCampus.com).

Zane is my sketch evangelism mentor.  If you want to learn, I encourage you to contact him at Open Air Campaigners.  Sketch evangelism adds another dimension to open-air evangelism.  I used it last year (see it in action here and here) with much success.  It is a great tool at college campuses because you can pose visual problems (sin) and work out the solution (the Gospel) as your go.

The night before and during my 2 1/2 hr drive to IUP, I couldn’t help but think about this time of year, the NHL Playoffs.  Lord Stanley’s Cup is up for grabs as the quest for the hardest earned trophy in professional sports begins.  Considering we were in Pennsylvania and just 1 1/2 hrs away from Game 1 between the Pittsburgh Penguins and Philadelphia Flyers, with kids wearing both teams jerseys , my creativity took over.  I was hesitant and going to let it pass until Zane did what a good mentor and brother in Christ does and prodded me to do it.  Usually you like to do sketches you’ve practiced.  I needed pushed and he push he did.

I used the moniker “It’s All About The Cup” as the NHL does in their tireless marketing.  I drew a cup in the center and setup my own explanation for the NHL acrostic. On one side of the cup it was “No Hope Left”.  And that allowed me to speak to man’s hopelessness outside of a saving relationship with Christ due to our sin nature.  As I progressed through the Gospel to the cross, I transitioned to the “Cup”.  I explained it really IS about the cup, but a different one.  The cup I explained was the one Christ asked God the Father to let pass.  The cup of God’s wrath. 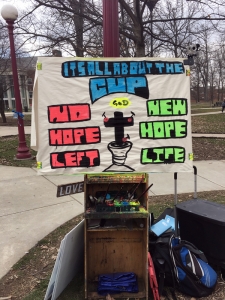 Upon completing the explanation of the Gospel, from the garden to the cross to the tomb and to the resurrection, all the while engaging students who passed by, I then revealed the new explanation of “NHL”, which as a result of a saving relationship with Christ to mean “New Hope in Life”!

We gave out many tracts, had some wonderful one-on-one conversations, and many laughs at each other (and the false god “Mho” that Zane invented), to the glory of God.  I yearn for days like these.