LOUISVILLE, KY – God’s faithfulness was on full display as Adam, Eric, Andy, and myself hit the road and joined up with brother Bill Adams and Sports Fan Outreach International (SFOI) to reach the masses at the 2018 Kentucky Derby.

As we arrived at Cedar Ridge Camp (our accommodations for the trip), the giddyness of reuniting with other brothers who I had not seen in quite some time began to set in.  Street preachers share a fellowship like no others.  When we come together an undeniable spirit of unity manifests itself.  Many brothers are ones that have been mentors to my street preaching such as brother Bobby McCreery of To the End of the Earth Ministries.  What a joy it was to see these brothers again! Equally as enjoyable is meeting other brothers that I’ve never known or only known via social media. 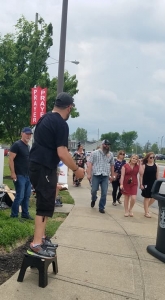 Jaycen Saab preaching to the crowds before the big race.

After unloading our luggage, we headed off to the meeting hall to setup the PA system and do sound checks.  Adam, Eric, and I had the privilege of leading worship for our time there.  Most of the songs were of the Sovereign Grace Music flavor.  Our time of worship while there seemed to return positive responses as the men sang to our Savior each morning before and hour of prayer before we set out on the streets.

Day 1 – Sunny with a Chance of Heckling

Our first day, I was assigned to brother Ken Hisle’s team.  After our morning prayer, we loaded up and arrived at Churchill Downs.  Our team was setup a block away from the track catching foot traffic on their way to the race.  As usual, many scoffers and hecklers would pass.  One bright spot was the officer who was the crossing guard.  She was especially enjoying the preaching and even at some times admonishing the folks passing by to listen and not mock!  God sends affirmation for street preaching in the most unlikely ways sometimes.

As the day progressed, the crowds grew larger and larger.  At one point during the mid-morning, we decided to send a couple brothers on our team to the corner across the street (a large intersection).  This would not only give us another place to further cast the Gospel net, but also by occupying that space prevent the hateful Pelagian “preachers” from setting up close by.  And it worked.  There was never a moment when there was no one to preach to.  Directly across the street sat about 10-15 law enforcement officers with a few National Guardsmen under a tent who were a captive audience throughout the day.

Within the first 10 minutes of preaching across the street from our main corner, the Lord brought a young man and young lady, Devon and Deon, by on their way to work.  I was able to engage them in a conversation about the Gospel.  Pray for them.  (Watch video here.)

After my first turn preaching in rotation, I noticed a man who was standing behind me listening.  He was leaning against a rail in the Yellow Cab lot awaiting the opening day crowds.  I made conversation with him and he took a tract.  Before I walked off, I asked on a hunch if the sex trafficking was as bad there as the Super Bowl.  He nodded that it was.  And boy he wasn’t kidding. So many young women were dressed provocatively and grouped up with one older man.  It’s heartbreaking to think how many were hiding in plain sight.  This was confirmed as I came across a news story the week after the KY Derby reporting many arrests.

The rest of the day was spent preaching, praying, and handing out tracts.  I was also able to enjoy the preaching from one of the best out there, brother Jamie Terry of Resurrect Your City Ministries.  I could literally listen to him herald the glorious Gospel all day long.  Click to take a look at his ministry here.

By the late afternoon into the evening, after the races would let out, the crowds came back through.  And they were much more “feisty” than when they passed by earlier in the day.  A day of alcohol-fueled revelry does that to a person.  I preached several times from the corner across the street from our main position which found myself surrounded for 1-3 mins. at a time while the crowds pooled up awaiting permission to cross the intersection.

Andy Schmelzer preaching to the crowds outside the infield gate.

Many folks naturally balked at the message of the cross.  After all it is foolishness to those who are perishing (1 Corinthians 1:18).  Verbal mocking, cursing, and even a few “accidental” nudges were to be expected.  A note here that when you are preaching in such hostile environments, it is wise to have your back against something solid so that no one can come up from behind you with ill intentions.  (I used a street light pole.)

For every handful of mockers, God seemed to place a believer in their midst who would shyly be looking at me nodding their head to the truth being proclaimed. However, one such believer actually pushed his way through the crowd to get to me and shake my hand with a nod of affirmation.  He leaned in and asked me, “Man why are you out here? This place is Babylon…”  To which I replied, “That’s exactly why I’m here…”  He thanked me for being there as he left.

About an hour or so later, we were all staging in a Kroger parking lot waiting for the charter bus to head back to camp.  While I was in the store, that same brother found me and we had the most wonderful conversation for about 15 mins.  He asked again why we would bring the Gospel to such a wicked people.  I explained that if not for the grace of God, that was me.

On the day of the big race, brother Bill Adams mixed up the teams and I ended up directly in front of the infield gate.  This is the roughest area with folks gathering and milling around in their drunkenness.  It didn’t take long for the crowds to build up, despite the record rains (the wettest KY Derby on record).

One thing I noticed immediately as we were setting up for the day was the unusual color of the rain water next to the curb.  It was a shade of blue that could not be mistaken for anything but porta-potty liquid.  Due to the heavy rains, when the workers would hose down the porta-potties at night, some of that washed out into the streets.  And I’m glad it did.

One aspect of street preaching I thoroughly enjoy is the illustrations all around that God provides.  If one is quick enough thinking on their feet, he can use them to drive home the point of the message he’s making.  I had one such moment as two young boys were playing in a puddle next to me.  I used it to illustrate to the people passing by that as the boys had no idea of what they were playing in, neither do many of them know or understand the sin they are playing in. (Watch video here.)

At one point, I felt like Jeremiah wanting to simply climb on a rooftop and weep over the people. 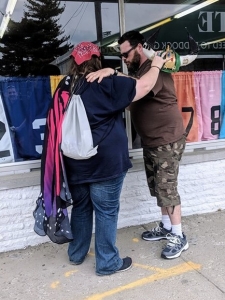 Soon after, a drunken man walked up to me and insisted, “…tell me about Luke…tell me about Luke”.  He had an idea that he was going to be ok because before he died Christ would personally come to him and he’d have an “Emmaus experience…” I passed him off to another brother on the team so I could continue preaching. He milled around, continued to make claims about his spiritual state, and before walking off, tossed his beer at me.  I recognized him as another false convert as his actions did not match his words.  He then returned and in a last ditch attempt to justify his drunkenness, tried to identify his drinking with the fact that Jesus drank wine.  As he pressed into me at one point, brother Ricky Gantz of G220 Ministries dealt with him as I continued to call him and his friends to repentance.  Pray that God would turn this man’s heart.  (Watch video here.)

The rest of the afternoon was more of the same, more rain, more drunkenness, more fornication, more hecklers…. At one point, a group of very effeminate men in police uniforms with tight shorts began dancing and splashing in a larger pool of porta-potty water.  What an illustration of the sin and wickedness that many were soaking in without any fear.  At one point, I felt like Jeremiah wanting to simply climb on a rooftop and weep over the people.

The KY Derby in person is much different than the fanfare shown on TV. They show the front gates going in to the grand stands. The reality of life at the back gates where some 70,000 folks pass by into the infield entrance where drunkenness and other “acts” take place tells a very different story.  Can’t wait to get back there next year.

CLICK TO VIEW MORE PHOTOS FROM THE 2018 KENTUCKY DERBY