BUCKHANNON, WV – As the temperatures rise and Spring comes about, out come the strawberries in Buckhannon.  The Annual WV Strawberry Festival is a wonderful fishing hole for lost souls.  Typically, I setup to preach at the Chinese restaurant on Main Street. This year I decided to change it up and move just down the street towards the rides and amusements.  This acted as a natural funnel where crowds would come by.

The Gospel, Kids, Suicide, Lesbians, and One Last Cast 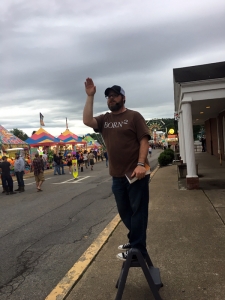 Eric and I were blessed to be accompanied by some saints from Life Builders Fellowship.  (ACM had recently held our Evangelism 101 class there).  It’s always exciting to see the brethren come out to publicly witness for the first time.  The ladies handed out hundreds of Gospel tracts while pausing here and there to pray for the preaching and conversations taking place.  A young man who was also from Life Builders Fellowship found his niche.  This young man is a Gospel tract machine.  His tenacity for ensuring every passerby near him was offered a tract was something to behold for sure.

I led off the preaching and Eric followed. We continued to rotate throughout the evening preaching Christ and Him crucified.  The Gospel was hitting its mark as it always does drawing the expected resistance and the occasional “Amens”.  Many of the mockers were of the “drive by” variety with no courage to try and back their claims.

While I was preaching I spotted a group of 8-9 yr olds and engaged them.  Once I had their attention, I stepped down while continuing to share the Gospel with them with the mic still on.  Some question as to why one would leave the mic on when in a conversation.  The reason is two-fold.  First, there are many folks around listening so it needs to be known that you are preaching to others at the same time.  Second, if you post such a clip online, it can act as a tool to help other Christians learn how to share their faith and encourage them.  After I finished, 3 of the boys took Bibles and so did their mother who was with them.

When they left, another young boy approached me while I was preaching.  I remembered he was standing around when the group of other boys were speaking with me.  He asked in a soft voice, “Can I ask you a question? Can someone ask God for forgiveness after they commit suicide?”  Whoa…. Sensing the Holy Spirit’s direction, I asked Eric to preach while I spent time with this boy. 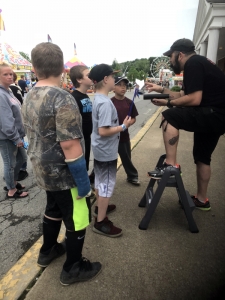 Jaycen sharing the Gospel with a group of kids. 3 of them and their mother took Bibles.

I explained some things about salvation to him and brought the conversation back around to his original question.  At one point I asked if he was considering suicide to which he replied, “No, I just had a question…”  I could sense that maybe someone close to him in his family had committed suicide.  As the conversation continued, I was able to explain the Gospel to him in more detail.  Our conversation ended abruptly while I was praying with him.  An adult whom he was with rudely interrupted us praying and yanked him away to go do something.  That same guy was apparently part of the carnival.  He passed by a few times later on in the evening snearing at the Gospel message.  As we were leaving, we passed a booth where the boy was and he held out his arm to hug me.  Please pray for Dakota.

Not too long after that wonderful, heartbreaking conversation, Eric was preaching to a crowd that had stopped by.  Over the crowd was a loud, aggressive voice that shouted, “Oh, so because I’m gay I’m going to hell?!”  I motioned for the young woman to come over and speak with me so Eric could continue preaching to the crowd that was drawn in.

I initially attempted to speak to her about sin, but she was insistent on making homosexuality the issue.  It was obvious she knew she was in sin as neither Eric nor I were speaking about the sin of homosexuality.  She asked what I thought to which I replied, “It doesn’t matter what I think.  What matters is what God’s word says about it.” She vigorously made her case and attempted to justify her lifestyle by informing me she was “married in a Baptist church”.

So taking her up on her word that she was a Christian, I took a less travelled route to addressing God’s view of homosexuality that catches many off guard.  As a Christian, I asked if she believed in the Trinity, which she affirmed.  I then took her to the OT and the recounted the story of Sodom and Gomorrah.  I said, “When we read where God smoked Sodom and Gamorrah (Genesis 19:24-25) because of the sin of homosexuality, not only was Jesus there, but He approved!”  Realizing she was backed in the corner she gnashed her teeth and threw the good ‘ol “don’t judge” card as she scurried off despite me pleading with her.

About 1 1/2 hrs later, she returned with even more lesbians.  Yet there was one in this group that was not as combative and allowed me to engage her in conversation.  I’ll never forget the look on her face, she was tanned with these sorrowful blue eyes.  She asked, “How is it a sin if this is the way God made me? I can’t help how I feel.  I read my Bible, but I don’t understand…”  To draw a parallel using the same logic I asked, “If someone was born with a tendency to have a bad temper, would we excuse them to go around killing people?  After all, they were ‘born that way'”.  She immediately was struck with a look on her face of contemplation.

Because she mentioned she reads her Bible, I wanted to appeal to that and read her 1 Corinthians 6:9-10.  After hearing God’s word, she was silenced and had no response.  I continued to speak with her as her “friends” pulled her away.  She resisted at first, but as many do, gave in to the leading of sin and left.  I believe God had used that moment to plant a seed.  What kind of soil it fell on is for God to determine.  Please pray for her.

Often when river fishing, I will make just one last cast.  As the crowds were whittled down to that of a ghost town, I threw one last line. Boy did Isaiah 55:11 play out right before us! A young man happened by and I engaged him personally as I was about to bring my time to a close.  This led to a 10-15 min of discussion of the Gospel.  I told him he only had 2 choices, to either turn toward Christ and receive the free gift of salvation humbling himself crying out to God for the gift of repentance and faith or he could simply turn away and continue on his way.  He definitely appeared jarred from the conversation as the reality of death and judgment were put before him.  I asked if he would consider that as he went home to which he replied in a soft voice, “Yes sir.” Please pray for Mike and his salvation.