BUCKHANNON, WV – After plenty of action on Thursday evening, Friday did not disappoint. It seemed as if Thursday was just the warm-up.  Eric and I met up at the festival and then were joined by Pastor Jeff Parsons of Family of God Church.  It was quickly evident that Friday would be even more livelier than the night before. 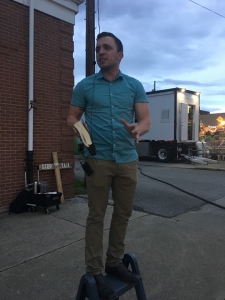 Seeing any Christian take a big step in their walk in any aspect is reason to rejoice.  Considering the history of the majority of pastors and churches refusing to support open-air preachers, to see a pastor preach in the open air for his first time made Eric and I excited.  When one preaches in the open air for the first time, it’s referred to as “breaking the sound barrier”.  And break the sound barrier Jeff did.  Though nervous his first time without the comforts of his pulpit he faithfully fills every Sunday, he settled in for his second time.  On the box his second time, Jeff did a fantastic job of preaching the Gospel to all passing by.  I look forward to many more days laboring with that brother!

As Eric was preaching, a young man came by and he engaged him.  After a short time, Eric began walking him through the law.  The young man quickly realized his predicament he was in before a holy and righteous God.  By the time Eric finished explaining the cross, he was completely undone.  Eric continued to minister to him and gave him a Bible before he left.  As I began to preach, he returned and sat across the street and was locked in as I brought the Gospel message.

Eric walked over and sat next to him and asked if there was anything else he could do for him.  To Eric’s delight, he explained that he went behind a carnival ride and surrendered his life to Christ as Savior!  Not only that, but he was adamant about being baptized the following Sunday.  Please pray for Brian.

While Eric was preaching and I was ministering to a young man from Trinidad, we were rudely interrupted by a man named Gary who was with the festival. With a loud, aggressive voice, he said that he was getting multiple complaints about us.  The latest was a woman supposedly complaining because “her children were scared to death” when they walked by us.  After showing him a photo of some kids from the night before who were approaching me with questions, he attempted to use scare tactics such as, “I’ve talked to the police, the mayor, the magistrate…” and “You fellas need a permit, everyone here has one…” and “Do you all have insurance…”  After I respectfully explained we didn’t need a permit, public property, and the 1st Amendment, he revealed what was really at the heart of the matter.  He exclaimed, “We pay a lot of money for the guy who brings this carnival in here…”  It all made sense.  The man he was talking about was the one who sneared at the Gospel every time he walked by and was the man who interrupted me while praying with a young boy the night before.

After I explained that I had contacted the local PD 2 years ago when I first started preaching at the festival, he continued his rant.  I finally explained we were not leaving, we didn’t need a permit, and I would be glad to speak to any law enforcement officers he sent down.  Simply, I called his bluff.  He left and we continued uninterrupted the rest of the evening.  At one point we even gave Gospel tracts to the officers passing by!

Strutting His Way to Hell

After I finished setting up the sketch evangelism for my last message of the night, I noticed Eric was engaged for what had been a very long conversation with a group of teenagers.  One young man was going back and forth with Eric as his other 5 friends watched.

The more foolish he looked after being hit with one presuppositional punch after another, the more his friends began to snicker at his absurdity. Click To Tweet 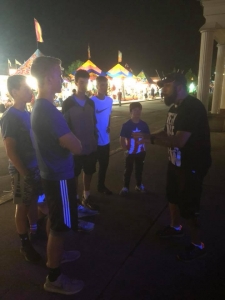 Jaycen trying to reason with a prideful atheist

I asked him why he didn’t believe in God.  Like a textbook example from the movie “How to Answer the Fool”, he belted out all the stereotypical, foolish answers from validating his reasoning by his own reasoning to being “absolutely sure there’s no such thing as absolute truth” and that he was “certain we cannot have certainty about anything”.  The more foolish he looked after being hit with one presuppositional punch after another, the more his friends began to snicker at his absurdity.

After several more minutes, I discerned it was going nowhere and that it was best to wrap it up.  I did plead with him to reconsider his position and warned him of the God he knows and will stand before.  He said he made peace with that to which I explained if he died in his current state he would have no peace.  Please pray for Dylan.

We wrapped up the evening with some sketch evangelism.  Many stopped by to watch and others stood in the distance the entire time.  This year was the most exciting by far.  Looking forward to another exciting year in Buckhannon…