COLUMBUS, OH – What a gem of an opportunity I discovered just 3 1/2 hours down the road.  The largest 4th of July celebration in Ohio (and I’d say anywhere around) is hosted annually in Columbus, OH.  Over 400,000 folks pack into a confined area for food, drink (mostly of the alcoholic type), and music that ends in a magnificent display of some of the best fireworks one has ever seen.  It is the annual Red, White, and Boom festival.

I joined brother Michael Coughlin, Cory Wasmus, and a couple others to preach the glorious Gospel to the hundreds of thousands in attendance.  The majority of the crowd were 16-20 yr olds soused with the alcohol of their choice.  Almost matching them in number were others openly smoking marijuana. All while the Columbus P.D. was looking on.  Apparently they were told to only intervene when things got out of hand. 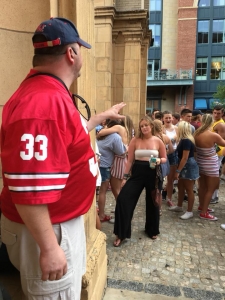 Michael led the preaching off as I engaged the crowds around him.  Shortly after we started the crowds began growing at break-neck speed.  Before we knew it, we were being pressed in on all sides by the party goers.  Earlier when we arrived, we unfortunately decided to leave my half-mile hailer in the car and go with the Akers instead.  What a mistake.  The crowd was so large, that with our Aker turned to full blast could only be heard about 10 ft. away.  (I would have gone back for the hailer, but brother Michael wanted me to shed a few pounds and parked us a few miles away…LOL). 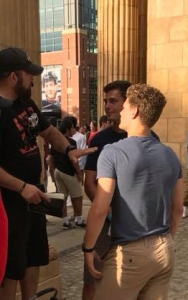 Preaching the Gospel to Roman Catholics

Not long after Michael started preaching, a young lady came by losing her ever-loving mind at the preaching.  If I didn’t see and smell the alcohol on her, I’d swear she was demon-possessed (though she may have been that too).  She would leave around the corner, only to return even more angry.  She even threatened me when I snapped a photo off.

Another brother preached and then I had my first turn.  The majority of hecklers were drive-by’s with little intent on engaging in any meaningful conversation.  However bleak it looked, I did spot a few on the perimeter of our area looking and listening.  We continued taking turns.

Of those in the crowd, it seemed that the vast majority of objectors were either homosexuals or Roman Catholics (or both).  It was typical for a pair of homosexuals to run up to the preacher, kiss and make out, and then run off laughing as they were strutting their way to hell.

Many had a look of astonishment on their face when I began using the celebration of freedom as a springboard into the Gospel.  I began explaining that no one is truly free and that we are all slaves.  We’re either slaves to sin (John 8:34) or slaves to Christ (1 Corinthians 7:22) and because of the Gospel through Christ can be slaves of righteousness (Romans 6:18).

It was typical for a pair of homosexuals to run up to the preacher, kiss and make out, and then run off laughing as they were strutting their way to hell. Click To Tweet

Typically, each preacher goes for anywhere from 15-25 minutes and then the next guy gets up.  This creates a continuous stream of Gospel proclamation.  However, due to many engagements, several times there was a quicker turnover as whoever was on the box was being engaged would step down and whoever was on deck would continue the preaching.  This continued right up until the fireworks started at dark. 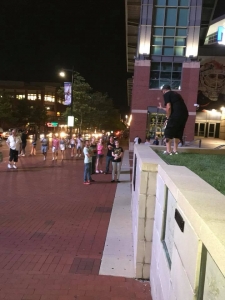 Elizabeth breaks down under the preaching of the Gospel as I preach one last time.

It never fails, after a long day of preaching that there is an encounter (and possibly conversion in this case) awaiting if the street preacher will just persevere just a little longer, or make one last cast of the Gospel net.  We left our spot and made our way to Nationwide Arena where the crowds would pass by.  Michael took to giving out tracts, Cory setup on the nearby street corner, and I hopped up on a wall that gradually rose 8 ft. over the sidewalk.

As I was about to quit, I began the Gospel presentation one last time.  As I began, a group of 6 young folks happened by.  I stopped and asked a girl with the group, “Do you have a question?” She replied, “No, I’m just listening…”

As I continued to preach the Gospel, she began breaking down under the preaching.  The more of the cross I preached, the more tears rolled down her cheeks.  Her friends weren’t as broken, but definitely had a look of concern on their faces.  She listened for the entire message and took a tract from Michael.  Her name was Elizabeth.  Please pray for her.

Cory, Michael, and I wrapped up the evening with some great pub food from Mac’s Proper Pub.  We had some precious fellowship recounting the day, sharing some of our personal testimonies, and other stuff street preachers chat about.  This will be one that we’ll circle on the ACM calendar to take a team to next year.