HARRISONBURG, VA – Brother Tony Miano of Cross Encounters Ministries wrote a track (available here) about pride that starts off like this…

The world defines pride as a feeling or deep pleasure or satisfaction derived from one’s own achievements, the achievements of those with whom one is closely associated, or from qualities or possessions that are widely admired. Yet the Word of God says a persons pride is followed by disgrace (Prov. 11:2); pride is arrogance (Prov. 21:24); pride will bring a person low (Prov. 29:23). The Word of God says pride is something evil that comes from a persons heart (Mark 7:21-23), and that God is opposed to prideful people (James 4:6). 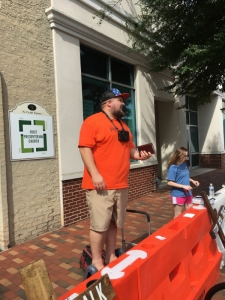 Briar Lam pleading with homosexuals to turn to Christ.

That pretty much sums up the overwhelming feeling in the air at the 2018 Shenandoah Valley Pride Festival.  Many were gathered at the courthouse to pridefully celebrate what God has deemed an abomination (Lev. 18:22).

Into the Lion’s Den

As Joseph and I were preparing to start preaching, Larry headed to the nearby street corner to hand out tracts.  Meanwhile, some of the other sisters hung around our area.  Briar took the rest of the group with him to crosswalk.  Crosswalking is the term we use to refer to walking while carrying a cross (usually with a message across it like “Are you ready?” or “Love and Justice”) through crowds and engaging them one-on-one.

Briar and others headed right into battle weaving through the crowds.  Interestingly, the sheer visual of the cross is enough to rile up those celebrating their wickedness.  Why? I believe it is because those practicing homosexuality know it is wrong.  And they know it’s wrong because God has given them a conscience and made them in His image (Gen. 1:27).  And because they were made in his image, they know it’s wrong but choose to suppress that knowledge because they love their sin.  It’s a textbook, living example of Romans 3.

Joseph kicked off the preaching and a few early attendees and hecklers passed by without much opposition.  As the crowds began to grow, so did the opposition.  By the time a few of us had cycled through the preaching rotation, there were plenty of folks beginning to become agitated at the preaching of the Gospel.  This is to be expected, though.  Whenever we shine light into the darkness, the initial reaction is most always anger and hatred because what once lied in darkness is being seen in the light and it is ugly.

Nothing New Under the Sun 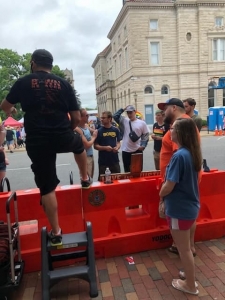 Trying to reason with homosexuals on the front lines

Homosexuals have their “go to ” questions to try and catch folks like us off-guard. However, while Briar was preaching, a lady approached and asked one such question, “Do you trim you beard? Or eat shellfish?” She was pulling from the playbook many homosexuals use implying that trimming one’s beard (Lev. 19:27) and eating shellfish (Lev. 11:9-12) is hypocritical because the OT forbids it too.  I explained to her how to understand the law (detailed information here).  She became very agitated and eventually walked off continuing to deny Christ.  Though she would return later.

As the afternoon went on, we actually had many wonderful conversations.  I think of one such conversation with a man named Joe who was as former Mormon now turned “Christian Communist” and an effeminate guy named Dylan who was there listening and engaging here and there.  Joe was extremely confused as his ideas about Christ were from the cult of Mormonism and that mixed with a political agenda based on Communism made the conversation very tiring as it seemed to go in circles every time he was confronted with Biblical truth.  Eventually, I just cut to the chase, asked him where he was going when he died, and shared the Gospel.  Sometimes you have to know when to continue and when to dust off your sandals and move on.

The next “silver bullet” from the group came from a young woman dressed in a skimpy burlesque outfit with fishnet hose with heels who was “a pastor’s kid and ordained” (watch here).  She threw the “judge not” card and seemed to have won the day for herself and sexually deviant friends.  That is until I asked her to read John 7:24.  I continued to explain who Jesus was talking to and the difference.  Frustrated, she retreated for a moment.

In that moment, a man triggered by that interaction continued his maligned justification.  His “silver bullet” was that God 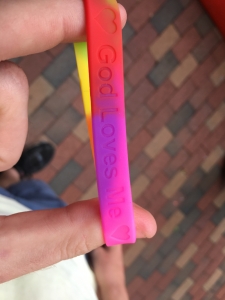 A homosexual-themed bracelet apostate churches were distributing affirming their celebration of an abomination before God.

created him that way, thus, God was responsible for his homosexual nature.  He also claimed to be a Christian.  After explaining Christ’s presence with the Trinity when God smoked Sodom and Gomorrah, His addressing homosexuality in Matthew 5 and Matthew 19 referring back to Genesis 2 showing marriage is for procreation, illustration, and sanctification, he continued to press forth with the orientation argument.  I simply asked if it would be right for a man to be able to molest little boys because “that was his orientation”.  He exploded when realizing his logic and justification were a straw house that fell quickly (watch here).

Perhaps the only thing more saddening than the grip of the sin of homosexuality on these folks was the affirmation from local “churches”.  It’s extremely difficult to contend for Biblical truth when so-called “Christians” are condoning and justifying what God has deemed and abomination.  Briar approached on “church” booth and pressed the “pastor” with what the Bible says about homosexuality.  His response was even worse.  While he acknowledged the truths of the Bible that Briar was contending with, he said, “I’ll never admit that here…”

God was gracious to us and gave us favor with the Harrisonburg PD and allowed us pretty much free reign throughout the day.  Again, a drum that needs beaten among open-air ministries “Don’t be a jerk”.  By seeing those lost in sin as the neighbor your commanded to love as yourself, it will break you heart and thrust you into action to rescue as many from hell that you can with the power of the Gospel of Jesus Christ.