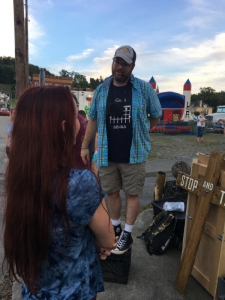 Eric reasoning with a girl who asked why doing drugs like marijuana was wrong.

SHINNSTON, WV – We finally solved the puzzle of a small, but popular festival known as Frontier Days.  We’ve not attended in the past due to scheduling updates.  Last year, Adam Felder and I attempted to go, but it didn’t look like there was anywhere to setup.  It seemed our only 2 options were either right on top of folks or too far away.

This year, I did some reconnaissance after making the local police department aware we were going to be there.  As I was looking for a place to preach, I met the Chief of Police.  By God’s providence, he was very accommodating.  After talking a while and finding a location he approved of, I learned why he was so welcoming. His brother-in-law is a local pastor.  God is good!

Eric, Cam, Waylon, and myself setup shop at the agreed location and began preaching and handing out tracts Friday evening.  The crowds were smaller than expected and apathy was at an extremely high level.  Most folks walked by in a zombie state unfazed by the preaching of the Gospel.  This is common throughout much of West Virginia (or any place in the Bible belt), but was so bad, at one point I was ready to beg God to send some hecklers.  It was good evening overall, as we ended doing sketch evangelism with a group of kids. Yet, for some reason, it seemed a bit discouraging with the lack of engagement.

Cam, Waylon, and I made up the team Saturday evening.  As we walked through the festival, Chief greeted us and requested we move back up the street because the ticket booth worker for the carnival rides complained he could not hear when we were preaching. I realized that this would put us further away from the crowds.  I asked if we could, instead, move down the other direction (deeper into the festival area).  Chief obliged and off we went.  Little did we know, this was just more of God’s providence.

This location proved to be fantastic.  We had a captive audience as our sound was clearly heard throughout the rides area where families were.  Many folks passing by stopped and listed.  On 2 different occasions I was able to engage with young folks with the Gospel.

As I was preaching, a young lady came up with a question.  She asked, “What does the Bible say about homosexuality?”  More and more, this question comes up just as boldly as she asked.  I explained what Scripture said when a young man walked up who was with her group.  He continued asking questions. 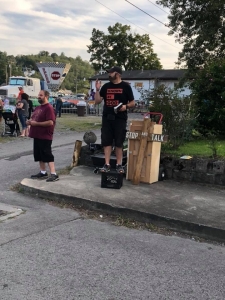 I was preaching on a milk crate courtesy of a local bar. I forgot our steps, but God always makes a way.

As many do, he attempted to justify his homosexual desires due to orientation.  He asked, “Why should I pretend to be something I’m not?” To which I explained regardless how he felt, everyone was made with either XX or XY chromosomes.  I then continued reading through 1 Cor. 6:9-10 and recounted how Christ addressed homosexuality in places like Matthew 5.  And when He did, He was doing it in reference to Genesis 2 referring to marriage between a man and a woman for procreation, illustration, and sanctification.

When he circled back around to pressing because of that’s how he was born, I offered a comparison that used the same logic.  That is, if a man had tendencies or desires to molest little boys. would that be ok? After all, that’s “how he was made”.  Or if someone had a bad temper, should we allow them to murder and beat people because that’s “how they were made”?  He quickly conceded as he realized his argument was unraveling before him.  I took the opportunity to shift gears away from the homosexual argument and point him back to the law.  As it is the schoolmaster that leads us to Christ (Gal. 3:24), it demonstrated to him that the Gospel puts us all on equal ground.  That I need it just as much as he did.  He walked away carrying himself differently after our conversation and graciously took a Gospel tract from Waylon, as did his girl friend. 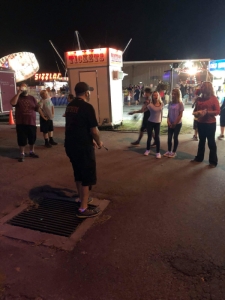 Sharing the Gospel through sketch evangelism to a group of young festival goers.

The night continued to be active with folks stopping by to talk.  As Cam continued to walk the festival and handout Gospel tracts, he brought a young girl back who wished to talk about the Gospel.  She had been in a church growing up that was busted by police for some type of crimes and she hadn’t returned.  We had a wonderful conversation about the Gospel and she seemed very receptive.  She left agreeing to consider the truths I had told her and the understanding of the urgency should she die without Christ as Savior.  She even returned about an hour later with some friends for a brief conversation and they even took some Bibles.

Our last major interaction was with a group of men while doing sketch evangelism.  They engaged and asked questions, but it seemed more to try and get a rise out of me than to really hear what the Gospel message was.  And that’s ok.  God is sovereign and His word does what He sets it out to accomplish (Is. 55:11).  We cannot control what they do with the truth.  We can only give it to them and trust in the gracious work of the Lord.