MORGANTOWN, WV – The phrase “It’s Game Day!” has a much different connotation for the street preacher. While most are imagining times of tailgates and touchdowns, the street preacher sees tens of thousands of opportunities to share the Gospel.  Our first game out was admittedly undermanned due to scheduling conflicts, but Joseph and I set out all the same.  After all, it’s God’s word through the power of the Holy Spirit that does the conversion, we just have to be faithful in getting the message out. 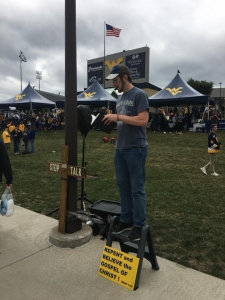 Joseph starts off the preaching for the 2018 WVU football evangelism season.

Joseph kicked off the preaching as the crowds rolled by.  Our usual spot proved to be just as productive as last year.  As Joseph was preaching, many folks responded to the preaching as they passed by.  There was the usual drunken hecklers and surprisingly a good number of fans affirming and encouraging us along the way.

As Joseph continued to preach, a man from the RV tailgating directly across from us nicely asked if we’d aim our hailer away from his RV.  We complied.  A little later on, as tailgates were closing up and fans were heading into the game, he even brought me a steak burger with all the fixings!

It never ceases to amaze me the folks we meet on the streets who believe themselves to be saved yet have no idea what repentance is. Click To Tweet

New to our preaching location was a cluster of tents with folks gathered fro pre-game activities.  Along with the families were many kids.  They used the grass between the tents and our preaching spot to practice their best Mountaineer football moves.  As Joseph continued to herald the Gospel, I took the opportunity to engage a couple of the young boys.

The boys mentioned they were Christian, one mentioned he was a counselor for Bible school.  As we began to talk, all the classic warning signs were there.  The one boy recounted the only thing you have to do is “confess your sins and ask Jesus into your heart”.   As the conversation continued, he mentioned the church he attends which is local to me.  I was not surprised to hear his thoughts as they church is on the seeker friendly side and sadly teach decisionism rather than Biblical evangelism. 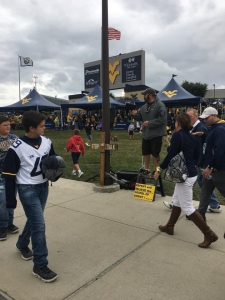 I continued to engage the crowds as Joseph handed out tracts.

As for the other boy (the counselor), he had no idea what repentance was.  It never ceases to amaze me the folks we meet on the streets who believe themselves to be saved yet have no idea what repentance is.  As we talked, though, he was captivated by the things I was explaining to him about the Gospel. He even returned later on when it was my turn to preach.  Please pray for Noah and William.

Just as the cross of Christ on Calvary disrupted history, it has the same effect many times on the streets.  And it disrupts the every day goings of unbelievers when it shows up unexpectedly.  Such an encounter happened as a woman was passing by enjoying her drunkenness.  She saw the cross and immediately exclaimed, “No, no! H#LL no! That shouldn’t be allowed here!!”  I engaged her as to why she was angry.  As I engaged her, another drunk who had been milling around thought he could stop my preaching by “sharing” his beer – down the front of me. 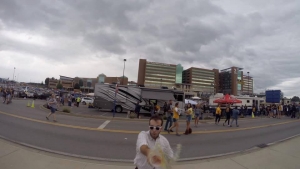 A God-hating drunkard throws his beer on me.

In cowardly fashion, he doused me with his drink and then ran off (watch video here).  He stopped, turned, and continued to verbally assault God.  I was aware of those who witnessed the event and knew that despite what my flesh wanted to do, it’s not about me, but about being an ambassador for Christ.  For Christ is worthy.  And for a brief second, instead of the beer, I had just a sliver of a taste of Acts 5:41. Praise God!

I told the God-hating drunk I forgave him and that there was forgiveness even for him.  He continued to blaspheme and curse God.  Please pray for both of them, that God would grant them the gift of repentance and save them.