Jaycen leading off the preaching

MORGANTOWN, WV – Our second WVU game of the year was full of events that God saw us through to His glory.  From the time we attempted to setup until our last few moments there, it was anything but typical.

Our usual spot to preach from is right in front of the main entrance in the grassy area.  We’ve been there the past 2 1/2 years…until this day.  A lady with the company that handles all of WVU’s marketing explained to us that the area was reserved for major companies (translation: “several thousands of dollars”) to setup.  I explained we usually waited until about 3 hrs before game time knowing that if no one had a spot there by then, it would go unused.  Yet she refused to allow us to stay.

I asked about another spot where the main sidewalk ends and this prompted her to call a WVU official.  She agreed to the new suggestion and off we went to setup.  Yet that was short-lived as a group tailgating there began complaining that we were setup in front of them.  God’s favor was evident again as this time the WVU official that came to intervene was a former co-worker of mine.  She in turn radioed the head of all parking lots.

After explaining that we’ve been there for the last 2 1/2 yrs and worked with the University PD, he suggested just for this game we go a good distance away at a

Joseph trying to explain repentance to a fan

different location and that “no one would bother” us there.  To which I explained we wanted to stay in the thick of things.  Again, God’s favor was right on time.  Just as I mentioned we had been working with the University PD, another golf cart approached with 2 uniformed police officers in it.  The official waved them down and we explained the issue.

After introducing myself to the officer, he looked at me and replied, “Weren’t you hear last game? There wasn’t any problem was there?” To which I replied, “No sir, officer.”  He then proceeded to tell the WVU official, “As long as their not doing anything illegal, they’re not doing anything wrong…”  This gave us the green light and we setup right smack in the middle of the crowds and went to work.

I explain all of that in detail to prove yet again the value of working in submission to local authorities (Rom. 13:1) and how far you can get when not being a jerk.

The Beauty and the Beast

What made our new spot beautiful was also what made it less than desirable. We sat up to the side of the main road where the majority of the foot traffic comes through.  Our spot was so much in the thick of it, fans have to walk around the preacher. And because we are facing the oncoming crowds, they hear more from further away and it offers much more interaction that our previous spot where fans would pass by right to left and vice versa.  That was the beauty of it. 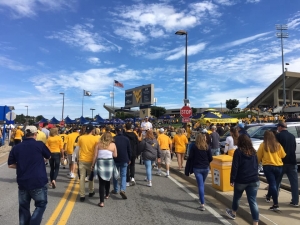 A fan’s view as they approach our new spot

While we were setting up a drunkard in his late 60s or early 70s was hurling the contents of his stomach in a garbage can as fans passing by had many laughs at his expense.  Strangely, it was a pretty accurate picture of what happens spiritually when you preach the Gospel to throngs of God-hating unbelievers.  They verbally vomit obscenities at the preacher and God Himself when the darkness of their sin is exposed by the light of the Gospel.

It was a beast for the very same reasons.  Rule #1 when street preaching in hostile places is to have something at your back, such as a street sign or light pole.  This setup afforded us no such luxury.  Thus, this spot will require a minimum of 2 people so as one can watch the preacher’s back.  Not 2 minutes after I began preaching, a lady pulled a club flyer for a local strip club out of my back pocket that someone had slipped there.  Thankful God sends folks like her by for moments like that.  This spot will definitely be a challenge for night games for sure!

The WVU Crowds We Know and Must Love

As the preaching got going, so the hate began.  The crowds were boisterous and had no shortage of invective profanities to hurl at the preacher.  Nor did they suffer any fatigue in their extensor digitorum muscle as they gave God and the preacher the finger.  While we were spared any fans “sharing” their beverages with us this time, Joseph was the recipient of an “accidental” drop of a well-shook beer.  Thankfully, our hailer was covered with a garbage bag.  (We had it tucked away under our steps so that no one would try and damage it.)

After we weathered the storm of thousands of fans we began to tear down.  As I finished up the preaching, a young lady was standing alongside listening.  Joseph was engaging her as I was packing up our equipment.  I joined in the conversation.

She mentioned a few hundred times that her grandfather was a Methodist preacher and she was trying to follow in his footsteps regarding living out her faith.  Before 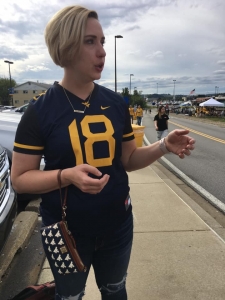 we went too far, I asked a simple question to establish a baseline.  I’ve found it very helpful in many conversations as it lays the boundaries and expectations.  I simply asked, “Are you a Christian?” to which she emphatically confirmed.  My very next question, “So is the Bible your authority?” was the follow up that will expose who you are dealing with.  She denied the authority of the Bible.  She refused to believe there was any issue trying to claim the name of Christ while simultaneously denying His word as authoritative.

The conversation when back and forth with her getting more and more agitated.  So much that a one point, as nicely as one could say such a thing, she mentioned how she would love to, “punch me in my [your] face”.  I told her that was irrelevant and wouldn’t change any of the truth that Joseph and I had explained to her.  We pleaded with her for almost 40 min. to no avail.  Her conversation went everywhere from homosexuality to rape to abortion to relative morality and anything else she could think of.  Finally, I asked if she believed in absolute truth.  She said, “No…absolutely not!”  To which I repeated her statement back to her to expose her folly (Proverbs 26:4-5), “So it’s absolutely true that there’s no absolute truth?” She accused me of twisting her words and even denied logic at that point.

This is a point in an exchange where sadly you must dust off your sandals (Matthew 10:14) and move on.  She claimed to be a lawyer, yet denied the very logic one who practices law must use.  All of her denial was a blanket to insulate her from exposure of her sin that God’s word was exposing.  Please pray for Jordan.