ELKINS, WV – The West Virginia state motto is “Montani semper liberi” or “Mountaineers are always free”.  Apparently, the Mayor Van Broughton of the city of Elkins missed that in WV History class as he played the accomplice to shutting down the preaching of the Gospel at this year’s Mountain State Forest Festival. For the last few years, I have preached Christ and Him crucified to thousands at this festival without incident, many times being thanked.  Yet this year, things took an unexpected turn.

Due to parades, we decided to preach along a side street between food vendors where we were far enough from the parade as to not be perceived as rude by trying to overpower folks with our preaching.  Brother Jimmy Hamilton from Scotland joined us a couple days before the college tour.  He, Eric, and myself rotated preaching for about 3 hours until the Fireman’s Parade started.  Since it is extremely loud, we decided to duck into a local restaurant and have some dinner.  After the parade, we were back at it.

As we began to setup again, a man from the cheese steak trailer jovially asked, “Aw man… You guys didn’t make me listen to enough preaching earlier? You going to preach some more?” To which I kiddingly replied, “Are you a Christian sir?”  And as if someone tripped a switch, almost demonically, his face turned to a scowl and he began yelling in my face in front of families passing by, “F#$& NO, I’m not a Christian!” He then took another couple steps away and shouted, “Who the F#$& do you think you are coming out here and ruining everyone’s evening.”

As we continued setting up and preparing to preach, the Lord sent a young boy about 8 or 9 yrs old who looked up and me and said,” Sir, don’t worry about that guy. Just keep doing what you guys are doing. Keep preaching.” The Lord is so gracious to send encouragement like that. 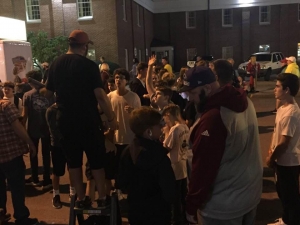 Youth surrounded me as I addressed their questions and explained why I said what I said to their atheist friends.

We continued preaching.  As I was preaching, a group of kids gathered around.  Earlier in the evening, a young man came who professed to be an atheist and was mocking the preaching and I lovingly, but firmly, rebuked him.  He was part of this group that was seemingly led by his best friend who took exception to what I told him earlier.  His angry friend was so full of hate and hurt, my heart broke for him.  His parents are plagued with health issues and so is he.  He verbally unloaded, shaking his fist at God.  You could feel the hatred coming from him and sense the hurt that was driving it.  I sensed he wanted to believe but could not reconcile God with the pain and suffering of he and his family.

After he finished voicing his anger, the Holy Spirit laid a thought on my mind that changed the entire conversation.  He finished spewing his anger and I simply pointed out to him that he was making the case for the need for Christ.  That ever single thing he described was a result of the fall of man (Gen. 3).  And I continued that if this is all there is in life, then what a miserable existence.  I continued to press on with emphasis on the temporal state vs. our eternal state that we’ll all live in.  By the end of the conversation, he shook my hand and was visibly changed to the point of at least reconsideration.

His professing atheist friend, however, was not so amicable.  He continued his tirade against the living God.  When I continued pleading with him to reconsider and that the very breath he was using to blaspheme and mock God was the very breath God gave him, he gave one last proverbial finger to God and stomped off as his dad trying to settle him.

Overall the night went well.  Saturday, well, that was a whole other story.  Look for the full story in Part 2 of this update…