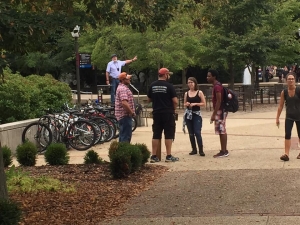 Eric and I ministering to some Roman Catholics while Jimmy preaches to the passing crowds.

BLACKSBURG, VA – Our tour started off in the southwestern mountains of Virginia at the campus of Virginia Tech.  This year’s stop picked right back up where we left off last year.  Similar environment, reactions, and conversations.

Jimmy, Eric, and I rotated in succession preaching in the main square.  Just as was the case last year, much of the day was spent conversing with Roman Catholics. One thing you can be sure of at VT is that many of the Roman Catholic students are well-versed in their theology of Rome.  Many conversations feel like you banging your head against a wall.  But, lest we deny the power of the Gospel as told in Scripture (Rom. 1:16) we must continue to lean into such conversations, though they are typically mentally exhausting.  Our time at VT was very fruitful as we gave away many tracts, labored through many conversations, and of course filled the air with the proclamation of the Gospel.  Please pray for Theresa, Heather, Zach, and Dominic. 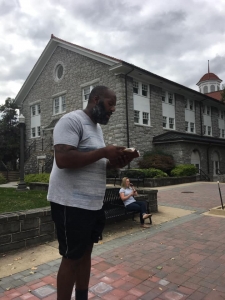 Larry bringing the word to students at JMU.

HARRISONBURG, VA – Due to a clear violation of the 1st Amendment at UVA (read about it here and here), we trusted God’s sovereignty and altered our previously plans and instead headed to James Madison University.  I have never been there, so to preach on “new” turf is always exciting.  Additionally, we were able to have dinner the night before with our ACM brother in VA, Briar and a young man I’m believing will have a fruitful open-air ministry one day named Jacob.

Tuesday morning found us at JMU in front of the library (of all places) with little to no crowds in the morning.  Yet, by lunch time and throughout the afternoon, it was buzzing with students.  Our team grew even larger as our ACM brothers Briar and Larry joined us for the day.

As the day progressed, many tracts were again distributed and the preaching was non-stop for hours.  Due to JMU’s strict noise policy, we kept our preaching times shortened to manage our voices.  For the most part, the students were polite and engaged with little heckling. 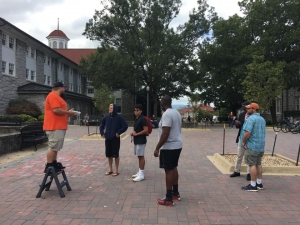 Briar answering questions to some who were lured in by the preaching of the Gospel.

Perhaps the most heartbreaking moments of the tour was at JMU.  The first happened as we heard first-hand the unbiblical teachings that are so typical in most mainstream college campus ministries.  A student told one of our team that he (and hundreds of others) was told at an event held by [X] Ministries that, “…it was not Christian students shouldn’t be going around telling others about Jesus on campus..” (paraphrased).  WOW! A professing campus “ministry” telling students to disobey the Great Commission. I’d like to say, “I’m shocked” but, sadly, this is the norm for many campus “ministries”.

The second moment caused even more grief as we were winding down and packing up.  We were waiting for Briar to finish a conversation with a young woman who was off in the distance listening as I was preaching.  She approached Briar and divulged that her youth “pastor” had sexually assaulted her.  She wrestled with this secret before confronting him.  She stated that he told her she “just needed to forget about it and get over it”.  To make it even worse, when she brought it before the “elders” of the “church” they dismissed it as the youth “pastor” was about to be made the head pastor.  Please pray for Owen, Jeanne, Alpha, Matt, Scott, and Will. 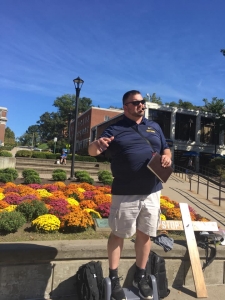 Michael preaching the Gospel at the Mountainlair.

MORGANTOWN, WV – Ah, back on our home turf in good ‘ol WV (pronounced dub-V).  The Mountainlair is always a tour favorite as amplification is allowed and conversations are usually pretty lively.  In addition to our team, we were joined by brother Michael Coughlin and another brother who came with him.  Michael like to start off sometimes with a hymn. So, “The Solid Rock” it was! We sang to the glory of God using pretty neat hymnals he made (loved the cover designed by one of his children). 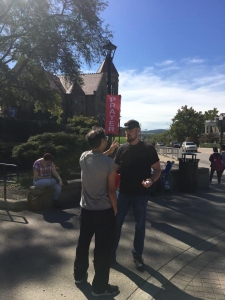 At one point, the man was flat out yelling at Jason.

The crowds were hit and miss.  There was the expected groups of students during lunch and change of classes, but it was a bit slow.  This may have been because it was the week before Fall break.  Despite that, there were some great interactions while preaching.  Many tracts were taken and we had some wonderful one-on-one conversations.  Please pray for Sarah.  She was a “Reformed Jew” who believed her good works would get her to Heaven.  Knowing that she reads the OT I pleaded with her to read Isaiah 53.  She stated she did not read the Scriptures because her rabbi (who was a professing homosexual) had to interpret the Scriptures for her.  After over an hour of discussion, she agreed to go home and read Isaiah 53 after all.  Pray that God would remove her blinders (2 Cor. 4:3-4).

SLIPPERY ROCK, PA – Our 4th day on the tour was to take us back to WVU for a 2nd day.  However, by God’s providence in the form of heavy rains, we found ourselves a couple hours away beyond the showers at Slippery Rock University in PA.  Though we had never been to this campus before Zane Dempsie and Jenifer Pepling joined us as they frequent the campus. 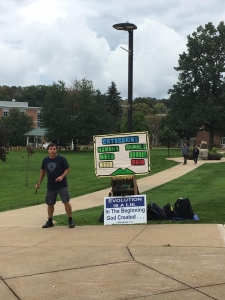 This campus has a small town, community college feel to it.  The quad where we setup was quiet for most of the day.  This place is saturated in apathy.  Many students simply walk by indifferent to anything being said.  As I was preaching, I had a few interactions that lasted about 5 min. but nothing more.  As Jimmy and I took turns preaching, Zane did a couple sketches that invoked some interactions.

Things got interesting as I was preaching my last message for the day.  Apparently it was National Coming Out Day.  This is a day where professing homosexuals publicly parade their sin around campus with their perverted symbol of God’s promise (a rainbow) representing them.  As I was preaching, I noticed Jimmy and Zane peculiarly looking over my shoulder.  As i quickly glanced over my shoulder, I could see what they were watching a parade of rainbow umbrellas and blasphemous signs. 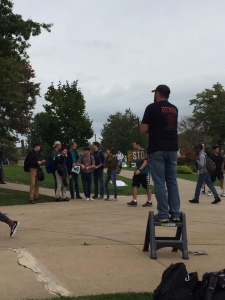 The crowds at SRU were a mix of atheists, agnostics, homosexuals, and some Christians sprinkled in.

As the parade of sin approached, I could feel indignation rising in my spirit as what God gave as a promise (the rainbow, Gen. 9:13) was being waved around in celebration of what He has deemed an abomination (Lev. 18:22, 20:13).  I addressed the parade of sodomy responding to their signs and remarks with grace and love and most importantly a warning from the truth of Scripture (watch here).  Pray for them, that God would wake them from the sin that is blinding their eyes (2 Cor. 4:3-4). 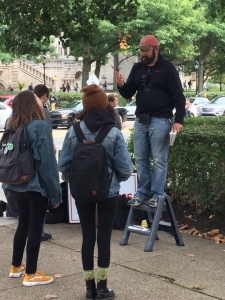 Explaining the difference between civil, priestly, and ceremonial law to nonbelievers at Pitt.

PITTSBURGH, PA – Our tour ended at the University of Pittsburgh.  Pitt’s campus is unique as it’s mixed throughout the city.  The closest thing to a quad is a grassy area outside the student radio station that is at a busy crossing.  This day was especially joyful as brother Don Karns joined us on his way through to Indiana.  What a joy it is to reunite with brethren you haven’t seen for a while.  The last time I labored with Don was in April in Washington, DC.

Jimmy led off the preaching and it wasn’t long before he caught the attention of a couple students who were professing Jews.  They were disrespectful and full of angst and the preaching of the Gospel grinded against their self-loving worldview.  When Jimmy finished, I manned the steps and continued to preach.

One of the Jewish ladies from Jimmy’s interaction returned to continue to contend for her idolatry.  For the next 30 or so minutes, I was interrupted sporadically by a man on a bicycle.  Every accusation he made I turned back with Scripture that left him scratching his head.  Then something happened that I’ve never experienced before… 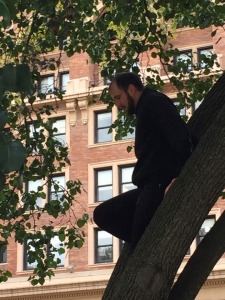 Tarzan the Heckler making his way back down the tree.

He parked his bike, took a few steps back, and crashed through the bushes behind us.  He then scaled a very large tree until he was about 15-20 ft. in the air above my head.  I then moved and asked the girl I was talking with to do the same as I didn’t know if he was going to jump on me or something.  This guy was Heckler Level Expert! He stood up on the branch and began yelling, “Jesus is the only way…. If you don’t turn to Jesus you’re going to die and go to hell.. Evolution is a lie… There’s no such thing as an atheist….”  He had the best theology of any heckler I’ve experienced, LOL.  By the time he finished (only about 2 min.) we had an even bigger crowd to hear the Gospel, PRAISE GOD!

As our day continued, Don and Jimmy alternated on the box as I was involved with what turned into an almost 2 hr. conversation with a homosexual who believed she was good enough to go to heaven and that God accepted her just as she was.  This conversation was physically, intellectually, and spiritually draining.  Round and round we went.  Every time I had her in a theological corner, she would just plainly deny the truth of Scripture.  Please pray for her, the other Jews, and Tarzan who God used to gather a big crowd. 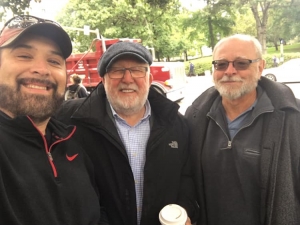 A quick pic with these dear brothers Jimmy Hamilton and Don “Stonewall” Karns before we leave our separate ways.

The 2018 Tour was one for the record books with all the fellowship and craziness that comes with the territory of open-air preaching.  By God’s grace, 2019 will be even better.