MORGANTOWN, WV – Night games are always lively in Morgantown.  And the “liveliness” starts in the infamous Blue Lot.  The Blue Lot is a sea of lost folks, many walking around inebriated from the alcohol that flows like water.  All this is set to the soundtrack of thumping PA speakers of every other RV or tailgate hammering out songs, some even with explicative lyrics.

As long as nothing upsets that balance, well, things go smoothly.  Yet when there’s an odd sound, a peculiar sound, that marches to its own beat, it is the equivalent to a needle being drug across an old vinyl record.  That sound is the sound of life among all the dead. The sound of the glorious Gospel of Christ being proclaimed.

It was that sound that shook the gates of hell as evidenced by raucous behavior and someone to call and complain about us and bring a Morgantown PD officer to pay us a visit.

One thing that I can attest to is that the crowds just get more and more bold in their celebration of sin every year.  Yes there’s the routine drive-by remarks from cowards who have neither the courage or intention to stand and have an intelligible discussion.  But at least a few times at each outing there are some really shocking responses of God haters (Rom. 1:30) passing by. 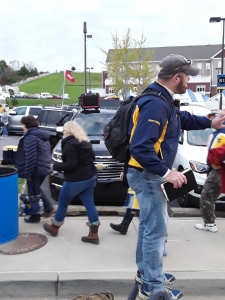 Tailgaters tried to drown out the preaching of the Gospel with their puny bluetooth speaker in background on the roof of their car. Their antics were no match for the word of God coming through a half-mile hailer.

I dealt with a few interactions, as did Joseph.  Eric began preaching and immediately a couple guys stopped by mock.  However, because Eric stayed focused on the Gospel message, the mocking turned to conversation.  I then leaned in and responded to the man so Eric could continue preaching.  His biggest issue was why God would allow children to suffer with sickness as a way of punishing the parents.  I explained the false narrative he was making.  Primarily because none of us are worth to suffer in that manner to atone for another’s sins.  After explaining that, I was able to make a beeline back to Gen. 3 in the garden where it all went wrong.  What started as a mocking of Christ ended up with a handshake, him taking a Gospel tract, and him thinking about the Gospel.

However, that was just the warm-up.  The crowds seemed to get more and more vile with their speech and blasphemy towards God.  Soon thereafter, a couple female WVU students, one very provocatively dressed, began screaming, “Are you saying God hates us because we’re gay?! God loves everyone!”  That lead to them embracing each other groping and kissing one another in front of us while guys were walking by voicing their approval of the actions and graphically yelling about how it made their physical state feel.  Wicked.  They eventually staggered off and the preaching continued.  Well, at least for a short while longer….

Sounds of a Different Beat

Our new location is near a small parking lot where many wealthy folks park.  And when they show up, the don’t want anything interfering with their party of food, fun, and drink.  How much to they hate the preaching of the Gospel? So much that the first thing they did upon arrival was to get out their bluetooth speaker and aim it right at us and crank it up.  I’m able to ignore such childish antics (something I think my wife calls “selective hearing”).  In fact, it wasn’t until Eric and I were talking about the events of the evening on the way home that I found out the song they were blasting at me was an 80’s hit entitled, “I Touch Myself”.  Though I have no proof, because of who they were and where they were parked, I have a hunch they were the ones who “invited” the police officer over.

About 15 minutes before we were done preaching outside the game, a Morgantown PD officer approached us (watch video here). He stated that he had a complaint about us being there. He said he had been listening for a few minutes and that our speech as indeed courteous and respectful to the crowds. Yet because of the complaint, he had to come over.

I asked him if it was public property to which he said, “No, on game day this is WVU property.” Perfect. I then explained WVU’s policies governing public speaking. I also explained that we have been there for over 3 yrs and had a great relationship with the former University PD Chief and the new Chief was aware of our presence.

Despite our pleading, he would not budge. I asked him what would happen if we continued (knowing we were in the right) and he said he didn’t know. That possibly we could be escorted out or ticketed for disorderly conduct.

At that very second, a drunk, underaged girl kicked a beer can on the ground that smacked the officer in the shin. To which Eric pointed out, “That sir is disorderly conduct…” We continued to talk for another 20 min or so. He said our agreement was with the old Chief and we needed something in writing from the new Chief (again wrong, we didn’t). So we obliged since the game had started and we were ready to go anyhow.

Today, I heard back from the WVU PD and not only did we get the approval, but the Captain who replied on behalf of the Chief had positive remarks about our ministry and told us if we’re approached again to have them call the University PD for clarification or get harassed in some extreme manner by fans that requires assistance to call them!

4 things to take away:

1 – ALWAYS approach a conversation with the officer from the position that he is right. Even if he’s technically wrong, he’s right because he’s in authority. That attitude fosters good conversations and as is the case here, often leads to favorable outcomes in the long run.

2 – ALWAYS keep Rom. 13:1 in view. By doing so, in the moment the officer relaxes a bit knowing you’re in submission to his authority. And later on, it speaks well of your character and is one less thing they can bring against you.

3 – ALWAYS live to fight another day. We could have continued preaching and pushed back. Yet we were only 15 min from our normal stopping time. So our mind’s focused on the long term goal not just that night.