MORGANTOWN, WV – Our last game of the 2018 WVU football season did not disappoint.  With a chance to go to the Big 12 title game, WVU squared off against Oklahoma on a chilly Black Friday night.  Night games at Mountaineer Field are something to behold.  The crowds are amped due to the magnitude of the game and they have been reveling in alcohol most of the afternoon.  So, a rowdy crowd was expected, and it did not disappoint. 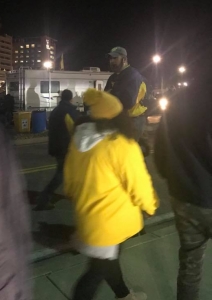 Preaching to the crowds at last 2018 WVU home game

Since I was the only one that would be preaching, I delayed our start time a bit.  Brother Waylon and I arrived about 2 1/2 hrs before kickoff.  We prayed in the truck and headed over to the stadium.  We setup in our usual spot and I began preaching.

For the most part, the crowds were exactly what we expected.  They were amped up on a volatile cocktail of adrenaline and alcohol. It never ceases to amaze me the level of vileness many will revert to (watch video here).  You name it, we heard it.  No verbal assault was off limits. 1 Cor. 1:18 was on full display for all to see.

Since it was Black Friday and we were just coming off Thanksgiving, I used that holiday for a sermon illustration.  Focusing on the theme of “Thankfulness”, I walked through the tenants of the Gospel message encouraging the passerby to “Be thankful for Christ!” (watch video here).

I preached for a little over 2 hours straight while Waylon shared tracks and had dialogue with anyone willing to chat.  We finished the evening cold, hungry, but satisfied with full hearts for what the Lord allowed us to be a part of this year.