ATLANTA, GA – An estimated 1.6 million people were in and around the Atlanta-Metro area to take in the sights and sounds of Super Bowl 53. ACM joined up with our brothers at Sports Fan Outreach International (SFOI) to spend 3 days engaging the crowds with the Gospel.

When attending these outreaches, it’s best to arrive the night before (a Wednesday). Besides getting to pick a good sleeping spot, you get to sit in on some great training from seasoned open-air preachers. This year offered 2, one for beginners (from Tommy Waltz of Gospel of God Ministries) and one for experienced preachers (led by Scott Smith of School Master Ministries). After our session, Scott led the group at Georgia State University (click to see footage) for some college campus ministry, as official registration for the Super Bowl Outreach (SBO) didn’t start until Thursday evening. Our day was for the most part uneventful seeing a very apathetic response (except for a few students telling the preacher he was “number one”).  I was able to share the Gospel with a young lady on the bus back to the Salvation Army (where we stayed). She was accepting of the message and took a Gospel tract. Pray for Simesha.

Engaging Atlanta with the Gospel 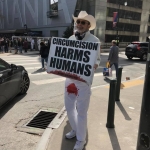 FRIDAY – As often the case, the Friday before the Super Bowl is the least busiest of the outreach.  Many folks in the host city are still working and though the transformation of the city is all but complete, workday routines are mostly still in place. It’s usually Friday evening before things get interesting.

This was the case for our team’s spot, though it started out interesting.  Within the first 20 minutes, a self-admitted “pasotor’s kid” stopped by to share his distain for open-air preaching. He addressed Matt De Jesus and promptly chastised him (us) for preaching the Gospel. In his words ,”…we were driving people away and should be leading people in the sinner’s prayer” This man was so misled, he was putting his trust in the fact that he, “prayed the sinner’s prayer and was baptized”!! When confronted on that point he had a complete meltdown. Matt was very graceful and contended with him until he stomped off. Pray for him.

While that was going on, Adam Cutshaw and William Nutt were engaged with a young lady. She came to a point of weeping and asking how she may be saved. Pray for Ashante.

A nominal Roman Catholic, Alesaundra had trouble holding to her worldview when engaged with the Gospel and a Biblical worldview.

SATURDAY – With the sun shining and the crowds a-buzzing, we sat up on our assigned corner. As expected the fruits, flakes, nuts, and cults were out in full force. The Bloodstained Men (a group who go around protesting circumcision) were in their usual garb of white outfits with red paint on their crotches. Besides their theatrical outfits, they have nothing of substance to listen to.

Additionally, the other cults such as the Jehovah Witnesses and Seventh Day Adventists (SDA) were on display. A small group of SDAs were next to our spot and on our corner. As I was preparing to engage them, William was already in a conversation. As I became part of it, the conversation heated up as I challenged him on their perverted views of annihilationism, the teachings of their founder (false prophetess Ellen G. White), and Sabbath worship. He eventually was so frustrated, the group packed up and left (my intention). (Click to watch the encounter here.)

As we stepped up on our corner, I saw a woman on the back of an EMS golf cart lying in a pool of blood. She was an elderly lady and was bleeding profusely from somewhere on her face. I walked over and asked her if I could pray for her. With a blood-soaked towel on her face she slowly blinked and nodded her head. I prayed for her as the EMT was orchestrating a meetup with the ambulance. Pray for this lady.

After about 20 minutes there, I went to get my cross, only to find that someone has stolen it.  But, with all the folks around, I didn’t have time to look for it, as the Gospel had to go out. As Sam Abebe was preaching, he caught the ear of a young lady walking by. Team leader Jeff Padia engaged her as I stood by listening. At one point, Jeff asked about how she could be forgiven for her sins. She said, “Well isn’t that what penance is for?” My antennas went up as I recognized that Roman Catholic-speak.  We continued to talk for about 30+ minutes. She identified as a Roman Catholic and was a lawyer by profession. 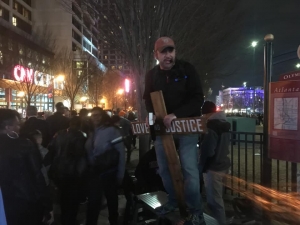 Proclaiming Christ to the crowds downtown Atlanta the night before the Super Bowl.

After contending for the faith, I ended up engaging her with presuppositional apologetics in an attempt to get to the God of the Bible she was denying. At one point she denied absolute truth (see that moment here).  When I pointed out the absurdity of that worldview, she agreed and could not reconcile it. She was very nice and had a lot of great questions.  I shared the Gospel and she took a tract.  Please pray for Alesaundra. (Watch entire conversation here.)

After our conversation, I went across the street to see the other half of our team and Steven Stanley preaching. As I was about to step on to the curb, I looked down and next to the curb by the garbage can was my cross! So with cross back in hand, I watched Steven for a few minutes and headed back over to our spot. The rest of the day was typical fare for a Super Bowl outreach with multitudes of people passing by hearing the Gospel and/or getting a Gospel tract.

SUNDAY – Super Bowl Sunday found us right next to Mercedes-Benz Stadium. After preaching my spot in the rotation, I continued to hand out tracts and pray for the other brothers who were preaching. Jason McGough had an intense encounter with a professing Christian who said the Gospel was an insult to the people passing by.  Pray for her. (Watch encounter here.)

Overall, the outreach was a great success.  Here’s are some numbers of interest: