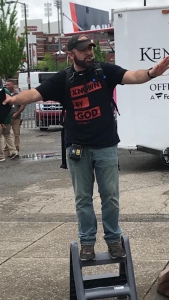 LOUISVILLE, KY – If one wonders about the merits of the claim of total depravity of man, he or she needs only to spend a weekend in Churchill Downs at the Kentucky Derby for proof. Readily available are times of gambling, sex, sex trafficking, drunkenness, and debauchery of all types. It is a living, breathing illustration of what God says about natural man in Genesis 6:5. Yet, in all the darkness, the Lord is faithful in lighting up the darkness as His Gospel goes forward with power and might (Romans 1:16).

This year the crowds were a bit tamer, but not due to sudden repentance to righteousness. New ticket booths were built and the gates were reconfigured. This made getting the crowds into the race more efficient, so there wasn’t the usual constant backup of crowds that filled S. 4th Street. However, as waves of fans lined up for the Kentucky Oaks on Friday and the Kentucky Derby on Saturday, there was plenty of folks to share the Gospel with.

One point of encouragement noticed at this year’s event is the number of new faces in the group. Sports Fan Outreach International, led by brother Bill Adams, does a wonderful job at putting together the logistics for such an event. This year found around 30 brothers that attended, broken up into 4 teams.

Our day got even “better” when the local store behind us put a portable boom box on full blast on the corner of their roof set to a local rock station. It actually made for a pretty amusing time when you think of it. A brother is preaching Christ crucified with Van Halen’s “Running with the Devil” blaring in the background. I believe at one point, Motley Crue’s “Home Sweet Home” was playing when I was preaching. The next day, the Lord showed us favor as an official from the Derby made them turn it down due to the interference it was causing with fans hearing the PA in the entry gates. (Of course their boom box was no match for our 1/2 mile hailer.)

Friday ended with a drunken man attempting to lure a brother who was preaching down into the street to “talk” with him. As he finished preaching, our intention was to simply ignore him in hopes he’d continue on. As I turned around, one of the newer brothers, who was a bit naive due to experience, was already there trying to reason with the drunkard. Being how he was only 17 yrs old, I made haste to get to intercede and get him away.

We continue to plow and plow because the moment we give up, we point to Romans 1:16 and call God a liar by doubting it's power. Click To Tweet

The man professed to not only be a Christian but in the session at his Presbyterian church. After he suggested a vulgar slur at me, I reminded this “clergyman” 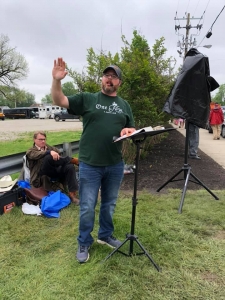 that “out of the mouth the abundance of the heart speaks” (Matthew 12:34). This infuriated him to the point his face turned white with anger. After I was able to get the younger brother to head back to our spot where the team was, the man continued to drop vulgarities as his wife attempted to pull him away. I asked if his pastor knew he talked that way, which seemed to infuriate him all the more. Sadly, more and more the shift in the American Evangelicalism to a desperate lack of holiness among professing Christians and clergy alike is found more and more.

Saturday was much the same, only in larger numbers. From the casual heckler to the immodest woman flashing her nakedness, there’s never a shortage of lost folks who need the Gospel of Jesus Christ. In addition to the blatant, vulgar activities, you’ll find the college-aged folks mixing alcohol with philosophy which requires much patience to get through.

One such man was enjoying mocking Christ’s first miracle at Cana (John 2). His version of John 2 found our Lord making wine so everyone could sit around and get drunk. This was his justification for his own drunkenness. I mentioned that wine back then was not of the same strength. Though that took the wind out of his drunken sails, he quickly pivoted to evolution. I offered to become an evolutionist if he could explain irreducible complexity, but he had no clue what I was talking about. He eventually left irritated but thinking.

The experience left us with one last spectacle. As we were preaching, a drunkard came by screaming and took off running with my cross. So there it was, a drunk in a pink and purple suit running with a cross with 3 Louisville Metro Policemen in pursuit. This is the second time my cross has been stolen this year (it was missing for about an hour at the Super Bowl in Atlanta).

Many times when ministering in such a volatile environment, it’s tempting to just dismiss the whole mess. After all, they’re drunk and uninterested, so why even try? We continue to plow and plow because the moment we give up, we point to Romans 1:16 and call God a liar by doubting it’s power.