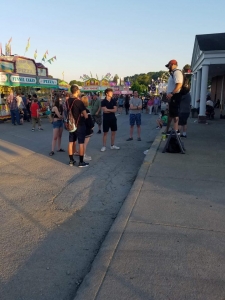 BUCKHANNON, WV – May brings in the nicer weather in WV and the WV Strawberry Festival with it. We look forward to it every year as it is the unofficial kick-off for our festival preaching. The downtown area is beautiful and very conducive to open-air preaching. This year, by God’s grace they were building a new office building next on the street up from the midway. The lot was full of gravel and scaffolding. Thus, no vendor booths or loud generators were in our ears while we preached like last year. We were able to stick with the Aker instead of having to use the 1/2 mile hailer. This made for better close-up interactions with the crowds.

Eric kicked the preaching off and I followed. As the Gospel was being proclaimed to the masses, we had a wonderful team of paper missionaries. Carla, Lauren, and Cam flooded the festival with nearly 1,200 Gospel tracts in the 5 hours we were there! All in all it was a wonderful night of ministry.

The Power of a Tract

Lauren was just ahead of our preaching spot, about a half a block away, handing out Gospel tracts to those passing by. A man took one and stopped by to talk to Eric as I was preaching. He mentioned to Eric that unless he did what that tract described, he could not go to heaven even though he had “kept them there 10 commandments…” Eric proceeded to walk him through the law and the Gospel which seemed to strike him. He left continuing to look at the tract and back over his shoulder at us as he disappeared into the midway crowds. Please pray for Marcus. (WATCH VIDEO HERE)

While Eric was preaching, a young lady walked up and asserted that the Bible, in fact, had contradictions in it (though she could not name one) and that she was a 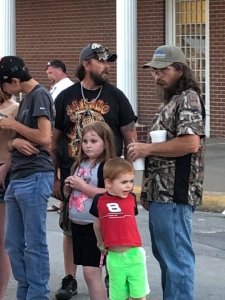 Man taken captive by the Gospel

lesbian. I invited her over for a conversation so Eric could continue preaching.  The conversation that followed was yet another testimony of how lost and broken people are in this world today.

She had 2 questions. 1) Does someone go to hell for being a lesbian? and 2) If someone commits suicide, do they instantly go to hell?  Her face and demeanor showed that her questions were full of sincerity and desperation.  I assured her that folks go to hell for denying Jesus Christ as Savior. She mentioned she was “saved at age 9” but was now a lesbian. After some exploratory questions, it was obvious she was just another victim to emotional manipulation in a church.

Since she asked, I obliged and told her what the Bible says about homosexuality (1 Cor. 6:9, Lev. 18:22, Matt. 5, Matt. 9, etc.). I soon asked her what the Gospel was and she had no idea. She was at a loss. I shared the Gospel with her and she appeared visibly broken or at least acknowledging that something was off in her life. As we were finishing up, her partner came to whisk her away, but not before I responded to her second question.

She mentioned that she was asking about suicide because her sister hung herself. As lovingly as I could, I responded with the same answer to her first question. That there was a possibility that her sister could have cried out to God the moment before she died. But we don’t know. I mentioned that because God is good, just, and merciful, regardless of what happened to her sister, we can be confident that it was the right decision that God made.  She took a tract and left with her partner.

After some exploratory questions, it was obvious she was just another victim to emotional manipulation in a church. Click To Tweet

Not too long afterward, they passed by holding hands and she was noticeably uncomfortable. Later on, when we were leaving to grab a late dinner, Eric saw her sitting alone on the steps of a storefront looking disheveled. I hope it was because she and her partner “broke up”. Pray for Lila. (WATCH VIDEO HERE)

Perhaps my favorite interaction of the evening happened when a handful of twenty-somethings stopped by as they heard the preaching. The conversation started off with one young lady asking why God allows evil in the world. It shifted from morality to abortion to homosexuality to science and lots of stuff in between. After our conversation they amicably said “goodbye” as they parted ways with me, each thanking me and taking a tract! (WATCH VIDEO HERE)

The Kid Gets It

As the night was coming to an end, a young boy was drawn over by the sound of the preaching while I was on the box for one last time. He was a believer who was excited to see someone openly declaring the Gospel message that his young mind knew. From only having hope in Christ (John 14:6) to knowing none of us can keep God’s law (Galatians 3:24) and that we all fall short of God’s glory (Romans 3:23), he was all over it. What an encouragement to see in a young person in this age where many are afraid to display their Christian beliefs publicly! (WATCH VIDEO HERE)

Our time at the 2019 WV Strawberry festival was very rewarding and the Lord seemed to help. We could definitely tell that we were being prayed for. For those of you who pray for us, thank you. Please continue to pray for the lost folks who heard or read the Gospel, that God would do a work in their life.