WINCHESTER, VA – As society continues its downward spiral, it simply acts as an affirmation that God has judged it. As we see in Romans 1:28, God has given many over to their depraved mind. Not only is this depravity accepted and common practice, but it is flaunted, embraced, and celebrated openly in public with any sense of shame nowhere to be found. A gay pride festival is one such pit.  As we were preaching at the 2019 Winchester Pride event, the day was filled with rebels marching over the rainbow bridge straight toward hell, but not without our voices in the wilderness pleading with them to repent.

We had a great group of brethren and even met a new brother (Peter Boland) who recently moved to WV (hoping to make him a regular with ACM). We split our group in two and setup strategically at two ends of the festival. Our group was greeted with a visit from Winchester PD. They arrived within the first 10 minutes of Briar preaching. As they asserted the city code of sound levels, we notified Joseph (who was the team leader for the event) and he made his way down. We agreed to comply with their code but asked them to measure our levels with a calibrated SPL meter. After proving we were within the limitations, they left. The preaching continued for several hours. 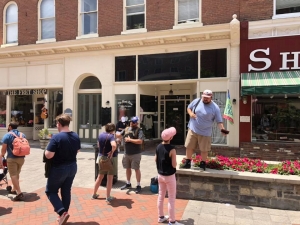 Briar (right) preaching while Eric (left) contends with a lesbian.

An advantage of working as a team is the ability to do multiple things at once. As Briar led off the preaching (Mark 16:15), Eric was contending for the faith (Jude 3) with a professing lesbian, and I was standing by holding a cross praying. This was to be the tone for the rest of the day.

Briar’s proclamation of the Gospel immediately drew the attention of those passing by. Some would stop, others would offer drive-by comments, then scurry away before an answer could be given (Proverbs 28:1). While the Gospel was going forth from Briar, Eric began reasoning with a lesbian. She attempted to twist and wrangle Scripture out of context like the most clever devil. By God’s grace, Eric was able to answer her contentions from Scripture and explain in context.

This continued for several minutes. Eventually there was a break in the action and Eric continued heralding the Gospel of Christ with boldness and love. As his preaching with further into the late morning hours and the crowds began to grow, so did the opposition to the preaching.  Soon it would be my turn.

I hopped up on the planter to begin preaching. Little did I know that events would lead to me preaching for close to 3 hours before a break in the action. As others 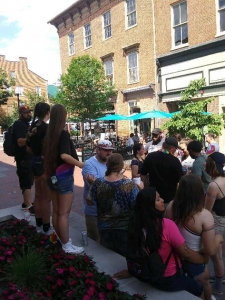 in our group, my focus was the Gospel. None of us took the approach of the run-of-the-mill hate preachers who just want a video on YouTube of them getting punched by insulting the participants. Though we did not cower away from the truths of Scripture regarding homosexuality, it was not the focus. When many came by and engaged in meaningful conversation, we stood on God’s word, even explaining the truths about homosexuality despite how uncomfortable it made the situation.

Satan is the father of lies (John 8:44). And those who partake willfully in such actions are his children (1 John 3:10). Many were such children of the devil disguised in t-shirts with a church name across it handing out “Jesus Loves You” stickers to everyone. Not only were they offering affirmation to those lost in the sin of homosexuality, they were doing so under the banner of Christ. And their wickedness didn’t stop there.

A handfull stood up on the planter next to me trying to stop the preaching of the Gospel. At one point, a man in the group began to interrupt me as I preached about the cross. He began yelling that it was not God who crushed Christ, but man! I only lasted about 10 minutes before indignation with his heresy overtook my tongue. I explained to the crowd that I loved them enough to tell them the truth, despite his lies. I asked him if he know what Isaiah 53:10 said. He was completely ignorant of the passage. I turned and read it to him, showing his ignorance to those listening. I take no pleasure in such moments while preaching. But sometimes, Satan comes disguised as an angel of light (2 Corinthians 11:14). And the best way to combat him is with Scripture.

No sooner than I was able to fight off the apostate group, a local street performer began to blast his trumpet in my face I as I preached. Quickly thinking of how to deal with him, I sent Eric and Nathaniel down to the next planter knowing that he couldn’t be two places at once. So the Gospel was still going out. Knowing that I would not be able to out preach the trumpet and seeing how this man was not going to leave anytime soon, I stopped preaching. After pausing for a moment as the crowd cheered him on, thinking they had won, to their dismay I opened my Bible back up, turned to Romans 1, and began reading. By the time I read through to Romans 6, his lips gave out and he walked away shaking his head in disbelief. Sometimes it pays to be stubborn. I then went back to where I left off and continued preaching.

The entire day was filled with moments of rage (watch here and here) and others who would attempt to have a conversation (watch here and here). All in all, it was a successful day as the Gospel went forth to those in attendance. Please pray for the Lord to soften their stony hearts.