The 2019 ACM Fall College Tour is in the books. The Lord was faithful to provide us safe passages between campuses, gave us favor with authorities, gave us great weather, and most importantly allowed us to minister to countless numbers of students with the Gospel of Christ. In His providence, God also brought many brothers to labor together from various ministries including ThingsAbove.Us, Cross Country Evangelism, and Schoolmaster Ministries. The first 2 days of the tour at Pitt and WVU, we had a large team of 9 men and finished up at Virginia Tech with our core team of 5.

PITTSBURGH, PA – The first day of the tour got off to a cool, wet start. As we began to preach at the University of Pittsburgh, we were welcomed to the Steel City with chilling temperatures and rain. However, the preaching went forth with power as many students were gathered to ask questions and challenge the message.

Many who challenged the message were of Roman Catholic backgrounds or homosexuals with a dash of professing Jews tossed in to make it interesting. My favorite exchange happened as we were finishing up. (Watch video here.) Pastor Ed Neimann used the nearby sign denoting Mental Health Awareness Month as a launching point for his message. While preaching, he was approached by a professing Jew who had spent several minutes dancing and mocking the preaching of the Gospel. As she approached and declared herself a Jew, Pastor Ed took her back to the Old Testament in an attempt to reason with her. Sadly, her eyes are extremely veiled to the message of the Gospel (2 Cor. 4:3-4) as she left as she came, dancing and mocking in ignorance. Pray for her. 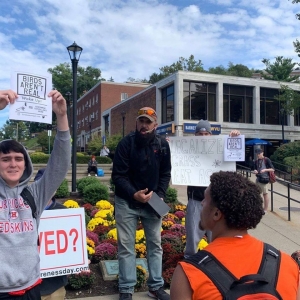 Protestors surrounding me as I preach.

MORGANTOWN, WV – Ask Scott Smith and he’ll tell you that WVU is one of his “top 5 campuses to preach in the country” – and for good reason. We find some of the most lively crowds there. Students at WVU often skip class and stop by the bookstore to grab supplies for impromptu mock protest signs to heckle the preachers. This year’s “protests” included “Ketchup is a smoothie”, “Parks and Rec > The Office”, and “Legalize Grass and Eat A–“.

Our team was there for only a few moments before brother Michael Coughlin was into a spirited conversation with a militant atheist, as Jimmy Hamilton kicked off the preaching. As Scott brought the Gospel, students began to gather quickly. Despite their hostile minds toward God, Scott continued to reason with them. (Watch video here.) The remainder of the day was much the same. The longer the preaching continued, the larger the crowds grew until the plaza in front of the Mountainlair was reasonably full.

As we finished the afternoon, I was able to have a great conversation with a young man who seemed to be seeking (watch video here) and Pastor Ed Neimann and Zane Dempsie finished up with some sketch evangelism.

BLACKSBURG, VA – Our tour finished up with the last 2 days spent at Virginia Tech. VT is one of my favorite campuses. Despite not being able to use amplificaiton, we have never had any issues with the authorities. I spoke with one VTPD officer this year who was very pleasant and had no issue with us as long as we were not violating school policy. He even took up for us as a student questioned his allowing our preaching to continue undisturbed.

Though the majority of the interactions at VT are a lower key in tone than those at WVU, they are just as intense from other angles. Our first day there found Scott in a great exchange with a transgender. (Watch video here.) Despite Scott’s patience and speaking the truth in love, the man left continuing to deny his God-given design and image. 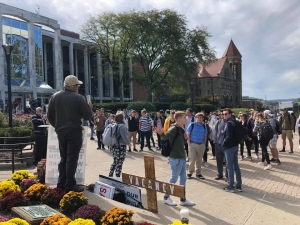 As our last day of the tour continued at VT, we found ourselves in all-too-common territory. That is explaining/defending the God-ordained, time-tested method of evangelism known as “open-air preaching”. Many campus ministries have fallen into something called “friendship evangelism” that is more focused on the “friendship” and not so much on the “evangelism”. They focus so much on displaying a “love” that is superficial in search of friendship, it is actually hatred. It’s hatred because it never tells of sin that brings conviction and warns of hell to come without repentance and faith. (Watch video here.)

The rest of the day was much of the same. The preaching routinely not only aroused hecklers and mockers, but ignited many one-on-one conversations. One such conversation found brother Mike Stockwell explaining the truth of God and exposing the foolishness of evolution to an atheist. (Watch video here.)

Lastly, despite the heckling and mocking, God gave us some encouragement through a VT Cadet who was in attendance during the day. He offered some words of encouragement in a note handed to our team. You can read it here.

The Lord was faithful to us on yet another journey through the biggest colleges in Appalachia. I cannot wait to see what He’ll do next year…