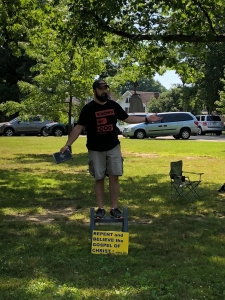 PARKERSBURG, WV – One of the great truths of the Gospel is that it puts every, single human being on equal footing with one another, as all of us deserve God’s wrath for our sin.  This truth also transcends ethnicity and cultural boundaries.  That was my opening gambit every time I started a message at the annual 2018 Mid-Ohio Valley Multi-Cultural Festival.

This type of festival attracts many folks who want to celebrate their ethnicity and cultural backgrounds.  And with Parkersburg having a large number of homosexuals, they didn’t miss a chance to wave their rainbow flags or voice their displeasure with the Gospel message as we preached every chance they got.  However, for the few homosexuals who were reasonable, we did have meaningful conversations despite their disagreement with the Gospel message.  Honestly, the festival is just a festival for everyone about anything.

In the weeks leading up to the event, I called the Parkersburg Police Department in an effort to determine whether or not any permits were needed.  What we’ve found here at ACM is that many Police Departments are more willing to work with street preachers than many know.  I assured them we did not want to interfere with the festival, but did wish to engage the attendees.  We ended up with a Permit of Assemblage (usually reserved for parade events) signed by the Parkersburg PD Captain and Chief! So, as long as we weren’t being jerks, this all but guaranteed we would not be bothered by local authorities.

One blessing we’ve come to know and look forward to having in the future is a gift from God named Cam.  Cam attends church with Eric and is a Gospel-tract machine!  His welcoming attitude and desire for one-on-one conversations is an asset any open-air ministry would be blessed to have.  Hundreds and hundreds of tracts went out to the glory of God because of Cam’s obedience and desire to see souls saved.

Young Men Out for Some Pizza 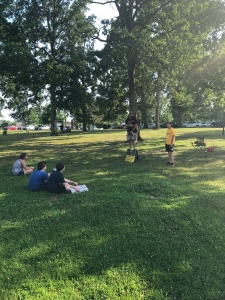 Grant taking the Good Person Test with his friends Noah and Jacob looking on.

Our setup was perfect as we were in the area where a lot of foot traffic passed by and the Lord graciously provided a trees for our shade as we preached throughout the afternoon.  To our left sat a large pavilion where folks would bring their food to eat.  A row of festival vendor booths were directly behind it.  The rest of the grassy area included a playground in front of us and benches everywhere else.

During one of my messages, a group of 12-14 year olds sat at the pavilion and were listening as they ate their pizza. I asked if any of them considered themselves a good person as I was preaching.  All to eager to answer and be seen, they responded.  A young man named Grant agreed to join me and take the Good Person Test.

Grant made is way over to our area and his friends Jacob and Noah joined, sitting down in the grass in front of us continuing to eat their pizza.  I walked Grant through the Law and the Gospel (watch here).  He seemed very receptive to the message and honest.  He agreed to consider the message of the cross and his eternity.  Afterwards, a couple of them took Bibles.

After they left, Noah came back with a question, “How can I make my friend to believe in Jesus (the Gospel)?”  I simply replied, “You can’t.”  I then started with Romans 1:16 and explained a few things.  I offered to make ourselves available via email as he took a tract with our information on it.

A Detractor Gets Derailed

As I was wrapping up a message, I could hear Eric behind me having a spirited discussion with a man and I caught, “…but Mark 16:15 says…” Immediately I knew this guy had an issue with the preaching.  I finished up and Eric passed his new “friend” off to me.

The man wasn’t so much against open-air preaching as he was with the message.  He believed we should be more loving and lift people up.  That we must focus on the fullness and joy they can have in life.  I asked what we were saying that was incorrect to which he responded, “You need to lift people up.  You can’t be telling them that today may be their last day or that one day they’re going to die and face judgment.  These people have all kinds of things going on in their lives, you can’t be telling them that…”  Yes, he was a stereotypical, professing Christian of the modern era in America.

I asked if he could give me an example in Scripture where anyone evangelized like that.  He could not (because it’s not there). His contention was that we could have massively larger crowds.  I responded that the crowds were irrelevant and the obedience to God and glorifying Him in our efforts was priority.  I explained the their temporary issues would not matter in eternity and that regardless of the crowds or responses, God’s perfect word never returns void (Isaiah 55:11).

I then explained how Paul tells us to use the Law in evangelism (Galatians 3:24).  And again, he balked at the answer.  After several minutes, I grew tired of his pragmatic merry-go-round of American evangelism niceties.  I asked what happens to someone who dies without Christ. He said, “I’m not to judge.” I pressed on with him to what happens and after 5 painstakingly long additional minutes, he finally admitted the reality of hell.

As the conversation was drawing to an end, a young lady walked over and interrupted our conversation.  I noticed her under the same pavilion the young men came from.  She had been listening to Eric and I for over 2 hours!  She excused herself and asked, “What church do ya’ll go to?”  When I explained we were not from the area she replied, “Oh, well I wanted to know because I would definitely visit that church.” To which our antagonist interjected, “So you like what their preaching? You enjoy this stuff?”  She answered, “Why yes I do.  I love the fact they preach the truth and tell it straight up without the fluff…”  I thought he was going to lose his mind.  He snapped back, “Well he’s (me) nothing special! And neither is his friend!”

You’re Not Hijacking the Jesus of the Bible

Next, he tried to take the opportunity to try and force his sugar-coated “gospel” approach to her, as if to get confirmation.  He began, “Look young lady, despite what they are saying, even though you apparently like it, Jesus is knocking on the door of people’s hearts…” I unashamedly interrupted, “- Whoa, whoa, whoa! What book, chapter, and verse are you getting that from friend?!” “I don’t remember…”, he replied.  I explained, “Friend, I’m going to stop you right there.  You see this is the foolish, unbiblical approach folks like you propagate and it needs to stop.  This sissy-fied “Jesus” that is lonely and incomplete without us.  He is more than complete in and of Himself alone.  The verse you’re quoting is from Revelation 3:20.  Jesus is knocking at the door of the church of Laodicea, not a person’s heart.”

While I agree with his remark that I’m nothing special (I’m not), his statements and attitude spoke volumes.  I wasn’t surprised at his next dig at me personally.  He remarked how he was baptized at 7 while I “painted the town red until later in life”.  Now, while his assumption was technically true, I addressed a couple things with him that exposed his false conversion and ended the conversation sooner.  I asked if his baptism saved him, to which he confirmed.  I explained works-righteousness and that if that was his trust, he was likely not saved.  He also confirmed that his “faith” was superior to mine due to him “being saved by baptism” earlier in life.  Pray for him.

Wrapping up the day, two young ladies walked over in front of me and sat on a bench directly facing me and listened.  I engaged Haley and we had a wonderful time walking through the Gospel (watch here). She was receptive and even took a Bible afterwards.  Please pray for her.

Over all, it was a great first year at the Mid-Ohio Valley Multi-Cultural Festival and I cannot wait to get back next year!