COLUMBUS, OH – After the exciting time last year, I could not wait to get back to “Red, White, and BOOM!” again. Nearly a half million people squeeze into a couple city blocks in downtown Columbus, OH. Brother Michael Coughlin of ThingsAbove.us organzies a great outreach if you ever have the chance to work with him.

This year’s event was sketchy as storm clouds hovered over most of the day. When Eric and I arrived at Michael’s house, the clouds had just opened up and dropped a massive amount of rain. By God’s grace, the weather tapered off and the crowds quickly began to gather once they realized the rains were gone.

After Eric led off the preaching, brother Ricky Gantz from G220 Radio Ministries began to preach. One thing I noticed about this event is there seems to be an abundance of professing Roman Catholics. And it wasn’t long before a young man named Alex came to assert himself and his religion before Ricky.  As he belted out profanities from one side of this mouth while professing his love for a “Jesus” he’d created in his own mind, Ricky continued to plead with him with urgency that “Roman Catholicism cannot save you, Alex…” which was the truth in love (Ephesians 4:15). Yet as many lost in sin do, he railed against the wise counsel from God’s messenger (watch here *LANGUAGE*). Pray for Alex and friends.

Rumblings Worthy of a Richter Scale

The longer into the evening we went, the larger the crowds, and the more rebellion against the truth of the Gospel of Christ. As I got up to preach, it was a mob scene. To give a perspective, see the video below…

To give even more perspective, our Aplivox Half-Mile Hailer was cranked full blast and was barely audible 30 yds away! The gathering of bodies was so immense, that it absorbed the sound of a speaker that easily broadcasts a 1/2 mile as the name implies. There were a few that would stop and consider the message among the mockers. However, like a dear brother from Scotland taught me, when we go to preach, we are preaching to a barrel of dead fish. And we do no know which ones will come to life or stay dead, so we press on and continue to herald the Gospel of Christ to any and all.

Logic Has Left the Building

When the fireworks began, we ceased preaching and our leader, Michael Coughlin, gathered us up for instruction. We decided to break up into 2 teams and post 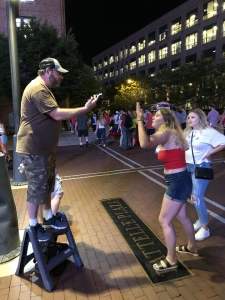 up on each end of the main street folks would be exiting through. Our team consisted of myself, Eric, and Pastor Corey.

Eric led off the preaching and it wasn’t long before a young woman professing to be a “philosophy major” stopped by for a “chat”. As Eric reasoned with her using presuppositional apologetics, her frustration soon manifested itself as anger you could hear a city block away. After trying to logically reason with her, he continued to plead with her with the Gospel, but her heart was of stone this night. Pray for her and her friend.

I began to preach as a few folks joined a young lady who had been taunting us with her gay pride flag waving around. At one point I tried to reason with the young man who jumped in the conversation. He asserted that it was “an absolute truth that there’s no absolute truths…” (read that again). After pointing out his absurdity  due to denying God, he eventually scurried off being out of arguments. (Watch here)

As the night drew to a close, God gave me the privilege of engaging a small group of folks. The conversation was the epitome of 1 Peter 3:15 and 2 Timothy 4:2. It was over 20 minutes of rapid fire questions discussing everything from homosexuality to science to morals and everything in between. (Watch here)

As we wrapped up, 6+ hours of preaching will leave one exhausted. Eric and I packed up, drove through a Wendy’s in what turned out to be a shady part of town, and made the 3 1/2 hour journey back to WV (next year I’m staying overnight…UGH). If you have the opportunity, contact Michael Coughlin for more information on this annual outreach to over 500,000 people in Columbus, OH. You’ll be glad you did!